Jerry Seltzer, co-founder of Bay Area Seating Service (BASS) Tickets in the 1970s, a San Francisco Bay Area computerized ticket services, died on July 1 of pulmonary fibrosis at the age of 87. From 1983 to 1993, he was a vice president of sales and marketing for Ticketmaster. On his return to the Bay Area he joined Bonjourfleurette.com as marketing and sales director and COO. He co-founded the Sonoma Valley Film Festival (now Sonoma Filmfest) and served on a number of community boards, including the Bay Area American Red Cross, and he helped produce the 30th anniversary special for Cecil Williams Glide church. He later was employed by Brown Paper Tickets in sales.

As of mid-2010, Seltzer was serving as an advisor to gotdibbs.com and working as a volunteer consultant to new amateur roller 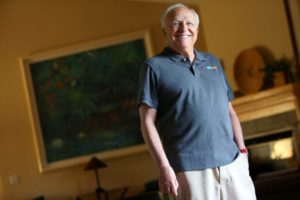 It is Seltzer’s involvement and formation of roller derby that he is perhaps best known. Seltzer said that his father had always wanted roller derby to be a legitimate sport, and to be in the Olympics, further adding that with the contemporary grassroots movement of roller derby, including the Women’s Flat Track Derby Association (WFTDA), Modern Athletic Derby Endeavor (MADE) and USA Roller Sports (USARS), he thought roller derby could now be an Olympic sport. He is known as “The Commissioner” by some participants in modern roller derby.

“Jerry was one of kind. A man with a mission,” longtime friend Michael Coats told the Sonoma (CA) Index-Tribune’s Emily Charrier. “Whether roller derby, BASS Tickets or the Sonoma film festival, the man could put butts in the seats. Sonoma is a bit lighter today without him.”

Seltzer was a promoter deluxe, much of it due to roller derby, a sport invented by his father, Leo, in 1935. Jerry succeeded his dad in overseeing the league in 1959 and spearheaded a sport popular not just in the Bay Area but by that time fully across the country.

He produced the film “Derby” in 1970, and was featured in “Derby Baby,” a documentary he brought to the 2012 Sonoma International Film Festival, along with a dozen derby players. Nov. 18, 1985 was declared “Jerry Seltzer Day” in San Francisco due to his work with Thunder Road, a drug rehab for teenagers.

Professionally, he was a born promoter who knew how to build an audience. It began with roller derby. The sport was invented by his father, Leo, in 1935, as a cheap form of entertainment during the Depression. When Jerry took over the league in 1959, the sport was popular in the Bay Area but not especially well-known across the nation. Seltzer changed that.

Spreading like wildfire, roller derby was broadcast on more than 110 television networks and played 52 weeks a year, making it one of the most-watched sports of the era.

Personal confession: as a child it was on my must-watch list every Saturday night on Channel 11 at 11 p.m., with memories of those San Francisco Bay Area Bombers, the Detroit Devils, and so many other teams.

Seltzer and Harold Silen founded BASS in the 1970s and its computerized system gave purchasers the opportunity to buy tickets over the telephone. Seltzer later served as vice president of marketing and sales for Ticketmaster, helping it grow into the country’s largest ticketing agency.

Details have not been released for a private memorial that the family will schedule for a celebration of life for a man worth celebrating and who always celebrated others.