I always knew that Matt Gibson, CVE, was just a step ahead. Working with Matt to either receive a scheduled Arenas column from him for Facility Manager magazine or to enlist his help in getting one of his assigned committee members to please get the article turned in before deadline, Matt was always one of the very best to work with.

So, consider it no surprise to hear that Spokane’s very finest — along with another of the city’s finest in 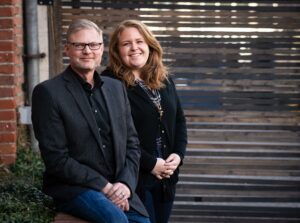 Becca Watters — have spread wings from employment at the Spokane Veterans Memorial Arena to saunter out on their own with the creation of Silverscout Presents, a live events and entertainment company designed especially for the Pacific Northwest.

The official press release hit on February 12 with the news that has been buzzed for some time now. The duo bring a combined 32 years of venue experience into a position that is clearly set up to fill a niche in concert promotion and event promotion. One event already on tap (pardon the pun) is the Lilac City 2020 Brewfest, on Saturday, May 16, on Wall Street in downtown Spokane. The fifth annual event is part of the Spokane Lilac Festival’s expanding event lineup and has grown into a festival attracting thousands of people each year and featuring dozens of local craft brewers, a full lineup of bands and musicians, and area food trucks.

In keeping with how so many companies are born in the entertainment and event sector of the business, the company’s silverscoutpresents.com website claims a start “in a garage during an especially righteous jam session laying down some gnarly tracks … ”

Before the truth comes out.

“This story actually got started in a coffee shop with an overpriced hot chocolate and a 16 ounce drip blend with room for cream.”

Either story carries weight as truth in the great Northwest.

After having hosted such major events and performers over the years as the U.S. Figure Skating Championships, NCAA Men’s and Women’s Basketball Championships, Pearl Jam, Metallica, Bon Jovi, Carrie Underwood, Fleetwood Mac, Elton John, Garth Brooks, Foo Fighters, and many more, Gibson and Watters look to now turn to providing entertainment experiences to crowds in the Upper Left, focusing not just on their hometown community but on other secondary markets in the region.

Congratulations, Matt and Becca, on this exciting new endeavor!