Providence’s Iconic Venue is Set to Celebrate its 50th Anniversary

On January 17, 1973, 50 years ago, the Providence Civic Center officially opened its doors to what would become known as New England’s premier arena and Rhode Island’s new home for all major sports and entertainment. The overall project took nearly thirteen years (1960-1973) from its first appearance on a State referendum, through the design process, construction, to an official opening. On November 3, 1972, simple ceremonies during the Rhode Island Reds hockey game unofficially opened the Providence Civic Center. On January 17, 1973, events all day and into the evening officially kicked off the opening of the Civic Center. Fifty years later, the arena remains a vital contributor to the State’s economy and an iconic New England destination for sports and entertainment. 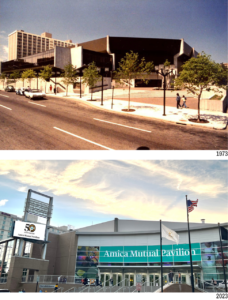 acknowledgements throughout the coming months. The kickoff to the celebration was the “AMP Gives 50” campaign which launched in January and will be a weekly initiative of acts of kindness to support the community.

We have unveiled our commemorative anniversary logo, which pays homage to the original Civic Center logo, as well as incorporating our new naming rights partner, Amica Mutual Insurance. See the “then” and “now” photo with this article.

In our 50-year history, we have hosted over 7,000 EVENTS and welcomed over 38 MILLION GUESTS through our doors. Generations of families have created fond memories at the Arena, and we look forward to continuing to be a part of those stories for decades to come. As the newly named Amica Mutual Pavilion enters the next decade under the leadership of the Rhode Island Convention Center Authority and ASM Global, the world’s leader in venue management, we will celebrate the remarkable events the Arena has hosted over the years, and the profound impact it has had on the community in the last 50 years.

• Over 7,000 EVENTS have taken place in the Arena and over 38 MILLION GUESTS have passed through our doors.

• On January 25, 1971, Mayor Joseph A. Doorley breaks ground for the Providence Civic Center.

• The first artist to ever perform on stage in the arena was JOHNNY CASH (performing for our soft opening in November 1972).

• In 1992, the Providence Bruins call the arena home and in 1999 they win the Calder Cup Championship.

• Providence College Men’s Basketball launched their 1972-1973 Season at the Providence Civic Center, and 50 years later they still call the arena their home court.

• In 2008, a multi-year renovation project was completed.

• In 2002, the Providence Civic Center became known as the Dunkin’ Donuts Center.

• In 2022, the Dunkin’ Donuts Center became known as the Amica Mutual Pavilion.

• The LONGEST running family shows include:

• Ringling Bros. & Barnum & Bailey Circus, which first performed in May of 1973. They returned annually until the Circus went off the road and held their very last performance in Providence in May of 2017.
• On November 17, 1973, the World Wide Wrestling Federation, known today as WWE, first appeared at the Providence Civic Center and continues 50 years later to entertain fans multiple times each year.

Ginnane is no stranger to the arena as she’s been working as the venue’s interim GM since September 2022 while simultaneously working as the head of sales and marketing, which she’s held since October 2019.

Before Utilita, Ginnane worked in hospitality roles across theatres and arenas in New Zealand and Doha. 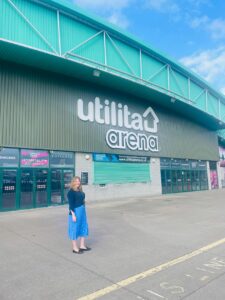 She moved to Newcastle in 2018 and joined Utilita at that time. From April 2018, she served as the SMG Europe head of commercial sales and marketing.

“The North East is an important market for ASM Global – with a busy Utilita Arena and the development of The Sage, and alongside our senior team members like Caroline, we have great confidence for the future here,” Ginnane said, “I am fortunate to work alongside an incredibly passionate and talented team, and we will continue to work together to deliver incredible events for the North East region.”

Major live music events at the arena this year include Lewis Capaldi, Kiss, and The 1975. Ginnane will also drive staff development and training and support the venue’s partners on their charitable giving missions via Food and Fuel poverty and Cash for Kids.

ASM Global is also set to operate The Sage, which is set to open in Newcastle Gateshead Quays and provide an estimated £70m annual boost for the local economy, creating 2,000 jobs.

The City of Waco (TX) announced that Dan Quandt will serve as the Director of Conventions & Tourism, a position he has held on an interim basis since November 8, 2021.

The Director of Conventions & Tourism manages the Waco Convention Center and the Waco Welcome Center in addition to spearheading tourism marketing for the City as a whole.

Quandt is well known in the tourism industry, having served as CVB director for Grand Forks, North Dakota, 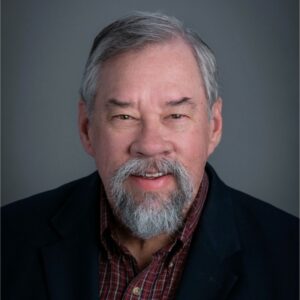 Waco City Manager Bradley Ford said, “I am thankful we were able to bring Dan on to lead the Conventions and Tourism team. The experience he brings from the travel and tourism sector is invaluable.”

Oak View Group has announced the creation of a national Theater Alliance with an initial roster of venues in markets across North America that will benefit from collective buying power, routing of non-traditional content, sponsorship opportunities, industry best practices and resources, as well as shared proceeds from an annual fundraising gala. 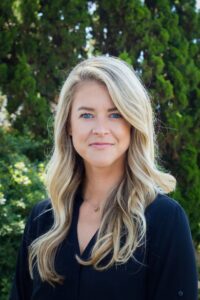 creating value for the entire ecosystem here,” said OVG360 CEO Chris Granger. “We want to serve the industry and all of its stakeholders. That means how do we best serve the venue, the artists, the fans, and corporate partners in the communities in which we operate? All members are going to have access to everything, but venues are different. They do have similar challenges, but they’re gonna be different in terms of what matters most to them.”

Modeled largely after OVG’s Arena Alliance that launched in 2015, the Theater Alliance is designed to provide similar services to a sector that may not have the resources, seating capacity, or staff of the typical arena or stadium-sized venue.

“It’s important to note that outside of booking, these buildings have operated kind of in a silo historically,” Giordano said. “Now we’re bringing together all the different departments, from operations, ticketing F&B, all the different things that make the wheel turn.”

Giordano was previously assistant general manager at the BOK Center in Tulsa, also an ASM Global regional booking manager and content developer overseeing more than 40 venues. He notes the Alliance’s “five pillars” – book together, buy together, sell together, think together, and brand together. He says the Theater Alliance is an example of the “brand together” mantra, “Showing how high-level the network is and how the program can maximize their revenue and increase buying power.”

Theater Alliance membership is invite only, with Granger saying the annual fee is around the middle five-figure mark. He says the Alliance seeks top-class venues and organizations interested in a long-term relationship.

“We are going out proactively to those venues and operators that are the best of the best,” Granger said. “The value of the Alliance comes not just from the OVG partnership, but from the relationship with one another, right? We want you to participate with us for, let’s say, three or five years as a starting point. We want to make sure there is opportunity for you to reap the benefits of the collective and for us to learn as much as we can about your venue. A one-year relationship serves nobody.”

The Alliance venues (see below for list) range from New York properties Beacon Theatre, Theater at MSG and Radio City Music Hall and extends to other high-profile theaters such as ACL Live at Moody Theater in Austin, the Pabst Theater Group in Milwaukee to the Paramount Theatre in Oakland.

“We are thrilled to be amongst the first members of Oak View Group’s Theater Alliance. OVG has proven to be an innovator in our industry,” says Pabst Theater Group Chief Operating Officer and talent buyer Matt Beringer. “With the formation of the Theater Alliance, we look forward to combining their expanded national reach and expertise with our 20 years of experience booking and operating world class independent concert venues.”

“313 Presents is proud to be an inaugural member of the OVG Theater Alliance,” added Howard Handler, president of 313 Presents in Detroit. “The Fox Theatre, Detroit’s crown jewel, is a destination for everyone within our community. This alliance provides opportunities for us to share and learn best practices from other iconic theatres around the country and to deliver even more to artists, tours and our guests.”

Mirhadi has extensive experience in the theater world, being a classically trained musician herself and for 14 years working at talent agencies representing artists largely within the performing arts realm. She says she jumped at the chance to help form the Alliance with Giordano called.

“It was an easy sell coming from Joe, a longtime colleague and friend,” said Mirhadi. “He really wanted someone who had deep knowledge and relationships in the theater space to help identify these partners to formulate not only the menu of services we’re offering but also identify which we wanted to be part of our inaugural class.” She said there are active discussions with several other potential member venues, which could be announced in the coming months.

“Many of these buildings are nonprofit in nature and are extremely expensive to run and operate, so we thought that it was important to support them at the philanthropic level as well,” Mirhadi said. In partnership with music industry’ social responsibility program Music’s Promise, the Theater Alliance Fund will be open for donations all year, Mirhadi said, with an annual benefit gala rotating cities.

IAVM members have an opportunity to find great savings through the Association’s FedEx Advantage Shipping Discounts. If you are not currently in the program, you can get further information by clicking here.

“There’s zero cost to enroll in the IAVM FedEx Advantage discounts, and best of all the program features no shipping minimums, requirements, or obligations.”

“Shipping costs continue to rise each year, so it’s very important for IAVM members to take advantage of this free IAVM member benefit. The IAVM FedEx Advantage discounts will help lower shipping costs, and the savings will help offset a portion or all of your IAVM membership dues.”

The benefits are plentiful for those who sign up for the FedEx Advantage® discounts program to start saving more. With the FedEx Advantage program, you’ll:
• Save 45% on FedEx Express® shipping
• Save 25% on FedEx Ground® and FedEx Home Delivery® shipping
• It’s free to sign up using your FedEx account number, and there are no quotas or commitments.
• Don’t have a FedEx account? No problem – you can set one up when you enroll!
• Typically, your FedEx discounts will be available seven to ten business days after you join the FedEx Advantage® program.
• Enroll today here!