Staff at the New Orleans Ernest N. Morial Convention Center made a long-lasting memory for a 13-year-old boy scheduled to perform at Delta Sigma Theta’s 54th National Convention after the show was suspended because of the threat posed by Hurricane Barry.

Originally, Kaleb Motley, a 13-year-old vocal student at LaVilla School of the Arts in Florida, was scheduled to 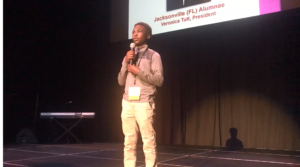 perform on Friday in the New Orleans Theater to more than 3,000 Delta Sigma Theta sorority sisters. However, during a Thursday rehearsal, event organizers suspended the conventions proceedings because of the threatening weather.

As a soloist in the youth choir of his school, and a hobbyist singer, dancer, and drummer, Motley was disappointed that he did not get a chance to show his skills during the Delta Sigma Theta National Convention after traveling from all the way from Florida.

“Kaleb and his family were so happy that he got VIP treatment from the Convention Center,” says Ceara Labat, Event Coordinator at the New Orleans Ernest N. Morial Convention Center. “We were also able to record his performance, so he will always have a memento of his time here.”

After the show’s cancellation, Delta Sigma Theta officials also donated more than 17,000 meals to the Second Harvest Food Bank, who distributed the meals to those effected by the severe weather.