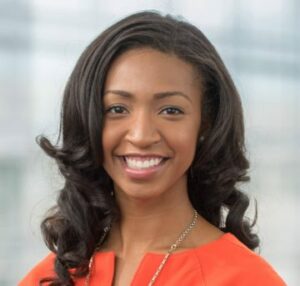 The website lists the Mission “to advance the global black community by developing leaders, informing policy, and educating the public.”

Andrias began her professional career at George Mason University where she served as an Event Manager and later progressed to the Director of Logistics and Events for George Mason University’s Office of Admissions. There she lead the Events Team’s planning and execution of recruitment open houses, road shows, college fairs, and youth conferences.

After five years of service, Andrias left her full-time role at Mason to serve as Senior Event Manager for Events DC at the Walter E. Washington Convention Center where she managed high-security and high profile conventions, meetings, special events, and athletic events including Presidential Inaugural Balls, The World Gas Congress, The American Israel Public Affairs Policy Conference, and the Congressional Black Caucus’s Annual Legislative Conference. After moving back to her hometown in Richmond, Virginia, she served as the Senior Facility and Sales Manager for SMG Richmond at the Bon Secours Washington Redskins Training Center in Richmond, Virginia and lead the efforts for facility marketing, guest relations, and special events during the 2019 Washington Redskins Training Camp.

She is a 2018 graduate of IAVM’s Venue Management School and received her CVP that same year. She was also acknowledged in the 2018 30-Under-30 class.

Congratulations from all your friends in the IAVM world on this extraordinary honor!