Oak View Group (OVG), the global venue development, advisory, and investment company for the sports and live entertainment industries, announced the addition of three seasoned professionals to Acrisure Arena, the newest world-class venue designed specifically for the Coachella Valley, and the Coachella Valley Firebirds, the 32nd AHL team debuting in Fall 2022 and the affiliate of the NHL Seattle Kraken. Joining the team is Leslie Deason as general manager and director of operations & programming of the Iceplex, Chef David Harvie as executive chef of Acrisure Arena, and Evan Pivnick as director of broadcast & communications of the Firebirds.

As general manager and director of operations & programming for the Iceplex, Deason will be 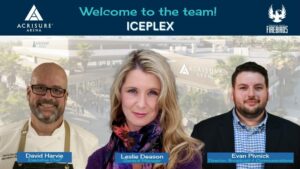 responsible for the development of strategy, execution of programming, and supervising of all management at the Iceplex. Deason has managed and consulted multiple facilities across the country and internationally as well as directed and coached hockey and elite figure skaters. A certified IAim General Manager, Deason is also PSA Triple Master rated, a Level VI International figure skating coach, and a USFS technical specialist. She will report to John Bolton, senior vice president, entertainment – facilities & general manager, Acrisure Arena, and starts her new role effective immediately.

“As a Southern California native, I love and appreciate the beauty of the desert and diverse lifestyle that comes with it,” said Deason. “Joining the Oak View Group family in developing and programming a new facility in the beautiful Coachella Valley is a once-in-a-lifetime opportunity and I take great pride in representing OVG in the community and delivering a world-class experience to all.”

Joining the team as executive chef of Acrisure Arena, Harvie will oversee all food and beverage operations at the venue for concerts and games as well as inside and out private event catering, public rink, all culinary staffing hiring and training, food safety and sanitation, food procurement, recipes, and menu development. The son of a classically trained French chef, Harvie most recently served as executive chef at Monterey Country Club in Palm Desert, CA. Previously he served as president of the American Culinary Federation First Coast Chapter in Jacksonville, FL. Harvie’s experience also includes serving as executive chef at Levy Restaurants for the NFL’s Jacksonville Jaguars and Washington Redskins, and the NBA’s Indiana Pacers and the NFL team, where he supported multiple events including the Super Bowl, the Kentucky Derby, the USTA tennis tournament in Flushing, NY, and the Stanley Cup Finals in Chicago. Harvie will report to Chris Morgan, regional vice president, and Tom Hoch, division executive chef for Oak View Group.

“I am super excited to join the Oak View Group team at Acrisure,” said Harvie. “Sports and entertainment have always been a passion of mine. I so look forward to the great times we will all have at the new arena.”

“Both Leslie and David are such pros in their respective fields and bring a wealth of experience to Acrisure Arena,” Bolton said. “It’s my pleasure to welcome them to our growing team as we continue on track for a December opening.”

As director of broadcast & communications, Pivnick will oversee all home and away game play-by-play duties along with player and coaching content coordination and creation for the Coachella Valley Firebirds weekly broadcast, magazine, digital platforms, and radio programs. Additionally, Pivnick will serve as the liaison for hockey operations and the front office to create media opportunities and materials throughout the AHL season. Pivnick will report to Gina Rotolo, vice president of marketing and communications for Coachella Valley Firebirds.

“I’m ecstatic to be joining the Coachella Valley Firebirds and Oak View Group,” Pivnick said. “There are so many amazing things this organization has already accomplished without even stepping on the ice. Getting to be a part of an organization in a new hockey city is really something special and I can’t wait to get started.” Pivnick comes to the Firebirds after five years with the ECHL’s Adirondack Thunder, where he served as the team’s director of communications and broadcasting. Pivnick attended Bowling Green State University in Ohio and graduated in 2017 with a degree in media production and studies. While attending the university, he was the play-by-play voice of the school’s hockey team and had the privilege of calling a game with preeminent American hockey broadcaster Mike “Doc” Emrick during his senior year. Pivnick is a native of Oceanside, NY, and credits going to New York Islanders games during his youth at nearby Nassau Coliseum as the sparkplug for his love of hockey.

“When you’re building out one of the most anticipated teams in the AHL, having strong talent on and off the ice in an absolute must. Evan demonstrates a passion for both the sport and media and his expertise in broadcasting will enhance the Firebirds brand,” said Steve Fraser, president of Acrisure Arena and Coachella Valley Firebirds.