AEG Facilities announced that the City of Glendale has extended the company’s contract to manage Gila River Arena, home of the NHL’s Arizona Coyotes, for an additional five years through June 30, 2026.

“AEG Facilities has done an exceptional job of overseeing all aspects of the operation of the Gila River Arena,” said Glendale City Manager Kevin Phelps. “From day one, AEG Facilities has provided the arena the best set of resources, operational expertise and economic vision to further the venue’s outstanding reputation. Through our partnership with AEG, we have clearly established Gila River Arena as one of the most important arenas in the region.”

In its two years of partnership with the City of Glendale for management of the arena, AEG Facilities has led the way in securing content such as the 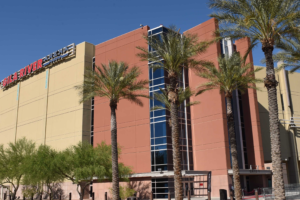 “We are looking forward to continuing our partnership with the City of Glendale for years to come,” said Dale Adams, general manager, Gila River Arena and vice president event development, AEG Facilities. “Gila River Arena is a first-class venue that continues to attract the most popular events on tour today.”

Glendale’s Gila River Arena anchors by the Westgate Entertainment District and is also adjacent to the University of Phoenix Stadium.