This is the first time Brewery X has branded a beer for sports fans. Options include “Duck Beer” (5% ABV Blonde Ale) and “Quack IPA,” a 7% ABV Indian Pale Ale. The co-branded beers will be a part of Brewery X’s beer lineup at Honda Center. The brews will also be available for purchase at local retailers in the coming weeks.

Located on the club level, Brewery X Biergarten, features an enhanced food and beverage menu, including 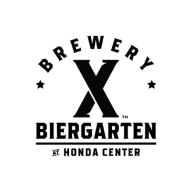 Brewery X beers on tap. This one-of-a-kind space is membership based for Anaheim Ducks games and open to all ticket holders for select concerts and events. The Anaheim Chamber of Commerce will hold a ceremonial ribbon cutting event on Thursday, October 21 at the Brewery X Biergarten at Honda Center.

“We are excited to partner with the Anaheim Ducks and Honda Center,” said Brewery X President, Clayton Wellbank. “We share the same vision of creating great experiences for our customers and look forward to a long successful partnership.”

Additional partnership highlights include venue wide branding including activation on the digital display network of over five hundred screens, displays on the 27 feet tall and 47 feet 10 inches wide scoreboard, television and radio exposure, and Anaheim Ducks activation at the brewery’s location in Anaheim.

“The Anaheim Ducks and Honda Center are thrilled to partner with Brewery X,” said Graham Siderius, Vice President of Corporate Partnerships for the Anaheim Ducks. “They care deeply about the local community as an Anaheim based brewery. Paired with their intense focus on high quality products and enjoyable guest experience, it created a wonderful opportunity for a partnership. We look forward to working together with Clayton and his team to create a fantastic guest experience at the Brewery X Biergarten on-site at Honda Center.”

Brewery X is the fastest growing and largest craft & independent brewery in Southern California, producing more than 250 flavors and styles of beer and hard seltzer. Brewery X products can be found in over 500 retail locations in California and Aspen, CO. including The Disneyland Resort, Trader Joe’s, Whole Foods, BevMo, Total Wine & More, and the Ontario Airport.