by Jason Judy
awards, education, Venues
Comments are off 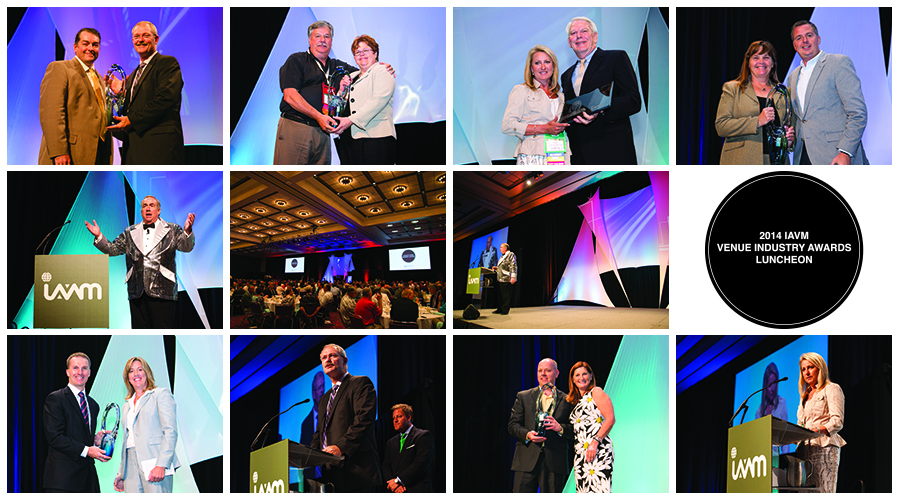 The 2014 Venue Industry Awards Luncheon—sponsored by Ungerboeck Software International and emceed by Chris Bigelow, founder and owner of The Bigelow Companies—took place during the 2014 VenueConnect Annual Conference & Trade Show in Portland, Oregon. The awards, hosted each year by the International Association of Venue Managers (IAVM), honored exceptional venues and professionals in several categories.

The Venue Excellence Award was created to annually recognize four venue types (convention centers, stadiums, arenas, and performing arts centers) demonstrating excellence in the management and operation of public assembly venues. IAVM takes pride in its members and member venues that excel in providing their communities with a safe and enjoyable space for all types of events. 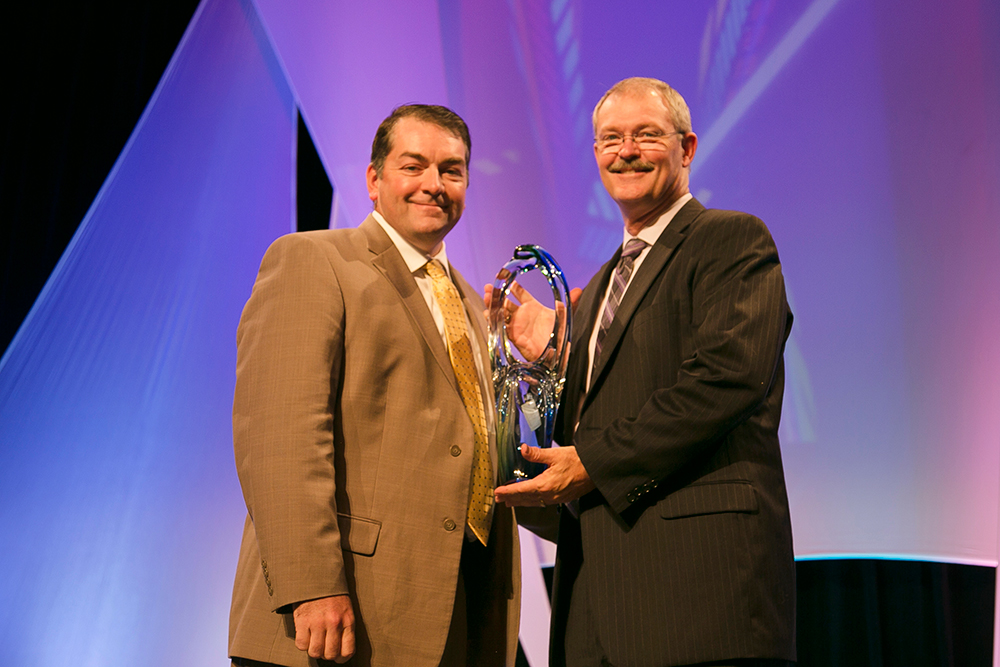 In addition to substantial staff training and a high level of customer care, MetLife Stadium reduced its carbon footprint by nearly 240,000 metric tons, reflecting an exceptional commitment to the overall success of the stadium.

“We’re honored to be the stadium recognized by IAVM for the accomplishments of our staff and stake holders. The 2014 Venue Excellence Award is significant for our team at MetLife Stadium, as IAVM has great influence in the global world of venue management. No doubt the professional development our six IAVM members have received from the association has played a part in our ability to be recognized as one of the premiere stadiums in the world by professionals in the sports and entertainment venue industry.”

Jeff Johnson, executive director, receiving the Venue Excellence Award on behalf of the Minneapolis Convention Center. The award was sponsored by Freeman and presented by Michelle Johnson, CIO at Freeman Audio Visual Solutions.

The Minneapolis Convention Center displayed a significant emphasis on the development and support of a thriving team culture, evidenced by several initiatives—including the implementation of an internal leadership forum designed to strengthen the current leadership team while fostering the growth of emerging leaders.

“Winning the IAVM 2014 Venue Excellence award is a great accomplishment for the staff at the Minneapolis Convention Center. Their hard work has produced great outcomes that focus on operating responsibly through industry leading sustainability efforts and an employee-centered culture. These provide a great work culture that allows our staff to better serve our customers each and every day.” 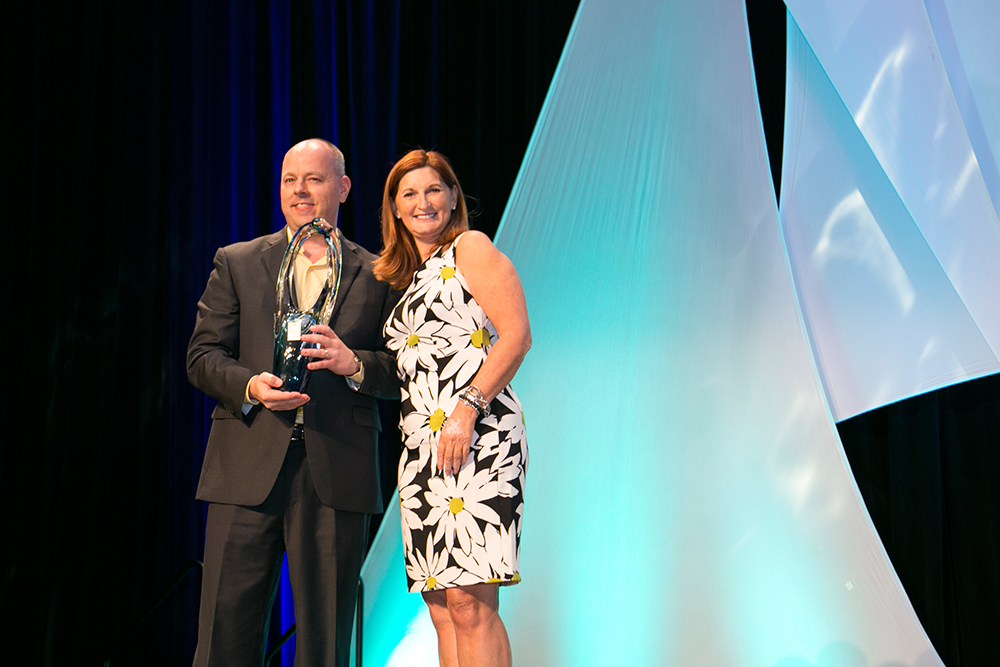 Darren Davis, CFE, executive director, receiving the Venue Excellence Award on behalf of the Orleans Arena. The award was sponsored by the BOK Center and presented by Kerry Painter, assistant general manager at the Cox Business Center.

The Orleans Arena received two significant facility designations, obtaining both LEED Gold Certification and OSHA’s SHARP status. In addition to these accomplishments, a professional development program empowering employees in the areas of negotiation, life safety, and customer service was created.

“We are honored to be recognized by IAVM for this prestigious award—It is the pinnacle of achievement over our past 11 years of operation.  To receive this acknowledgement in the same year as our LEED Gold Certification and SHARP safety rating from OSHA is a true testament to the dedication and professionalism of the Orleans Arena staff.” 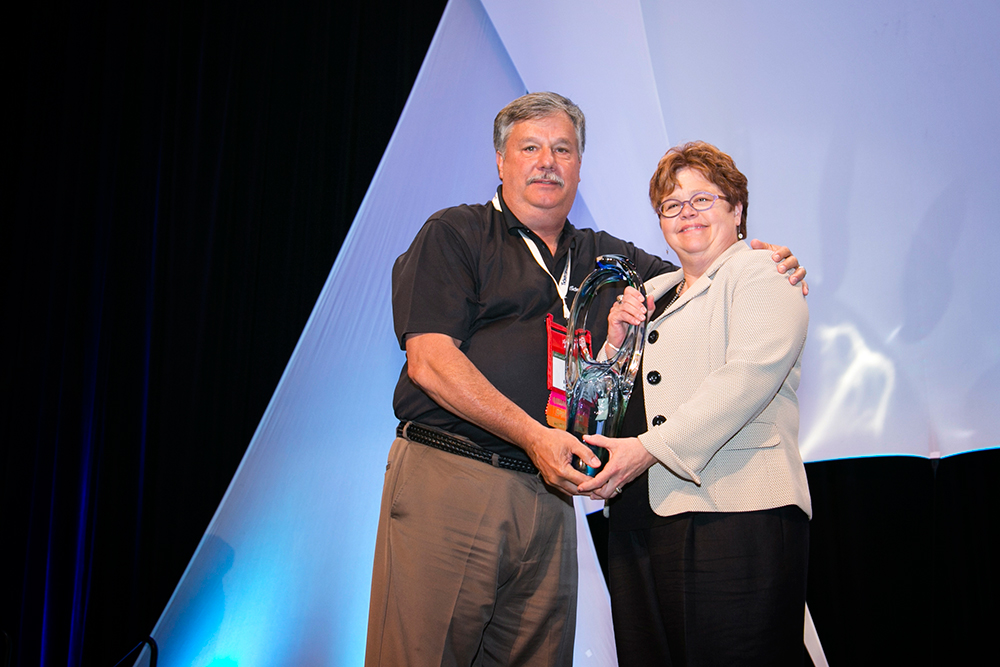 Robyn Williams, CFE, executive director, receiving the Venue Excellence Award on behalf of the Portland’5 Centers for the Arts. The award was sponsored by TicketsWest and presented by Jack Lucas, president at TicketsWest.

The Portland’5 Centers for the Arts focused on exceptional service to clients and patrons through both the development of new initiatives and the re-examination of existing procedures— all accomplished with a small, efficient staff.

“We are deeply honored to receive this award from our peers who represent some of the best managed performing arts centers in the world. Our team strives for excellence every day. This is proof positive that we are accomplishing just that!”

The Venue Education Award acknowledges allied organizations, venues, and academic institutions that demonstrate active student involvement, excel in available educational opportunities as well as demonstrate leadership in education. The award also honors individuals who are actively involved in the education and continuous development of the venue management industry. 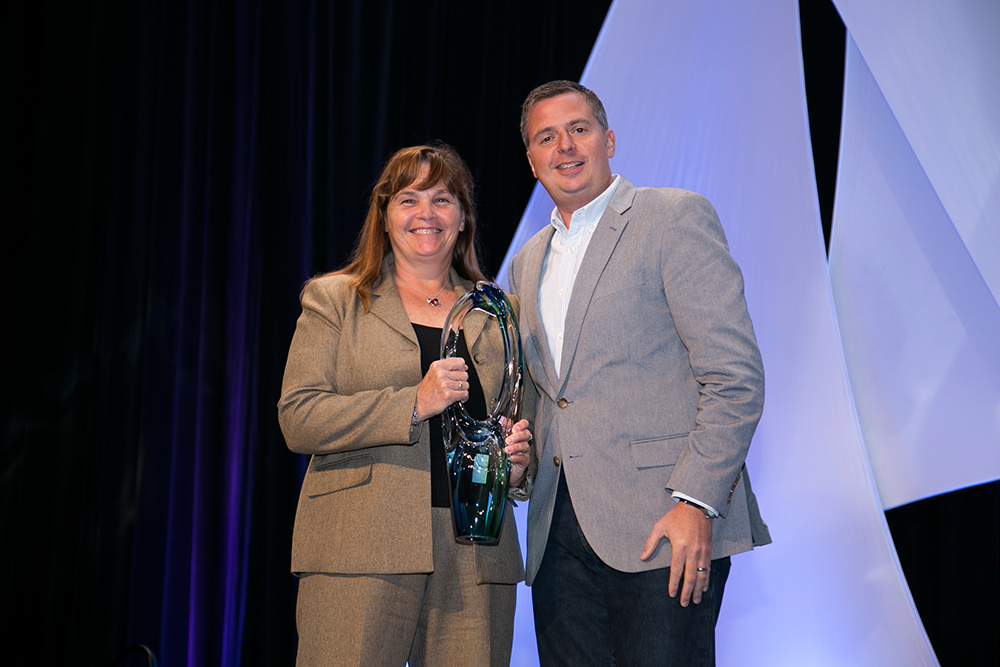 Wendy Riggs, director, receiving the Venue Education Award on behalf of the Tuscaloosa Amphitheater. The award was sponsored by Northwood University, and was presented by Doug Booher, CFE, director at the Indiana University Auditorium.

The Tuscaloosa Amphitheater, in partnership with the University of Alabama, provided a credited internship program covering all levels of venue operations—including interactions with patrons, artists, and vendors. More than 45 students benefited from the program, receiving real-world experience and job placement assistance after graduation. 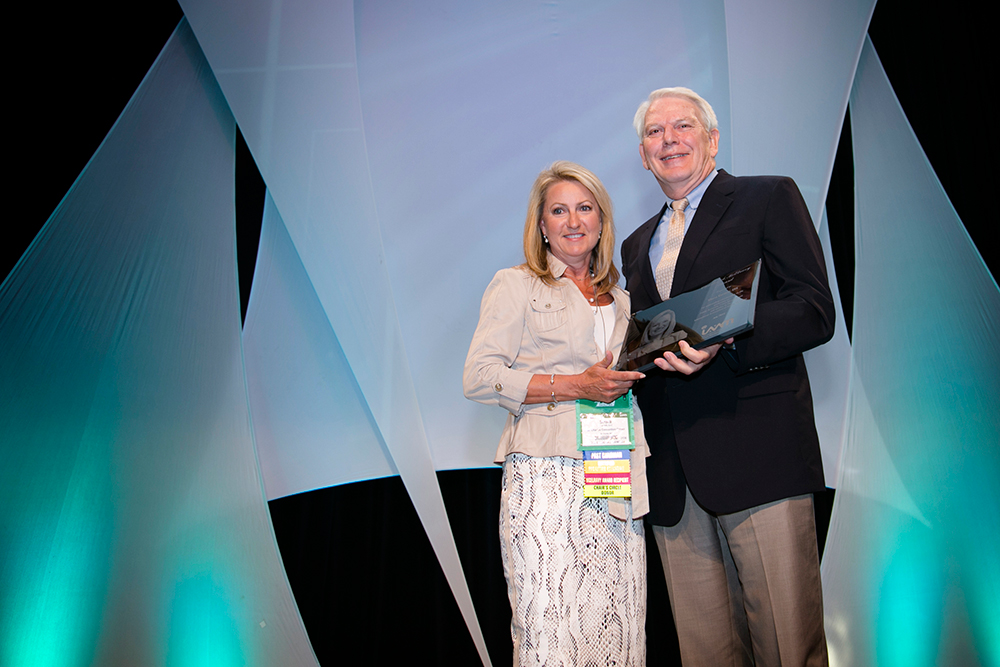 The Charles A. McElravy Award is named in honor of one of the founding organizers of IAVM for extraordinary contributions to the association and the profession of public assembly facility management over a number of years. The 2014 McElravy Award recipient was Shura Garnett, CFE, regional vice president at Global Spectrum. The award was presented by Cliff Wallace, CFE, chairman at Shenyang New World Expo Ltd. in Hong Kong.

“I am humbled beyond belief at this honor that IAVM and my colleagues has given me. It is simply the highest achievement of my career and of an industry and organization I love dearly.”

As an IAVM Member, Garnett has been active since 1988, earning her CFE in 2000. She served as Board Chair of IAVM from 2009-2010 and has also served on numerous volunteer committees for the association. During Garnett’s tenure as Board Chair, she was instrumental in purchasing and implementing, VenueNet, still considered one of IAVM’s core member communication platforms. She also led efforts to change the association’s name in 2009-2010, which was at that time called the International Association of Assembly Managers. She also worked to rebrand the annual conference and trade show to what is currently known as VenueConnect.

“Shura’s dedication to her profession and to our organization is inspirational. The overall advancements she helped set in motion during her time as IAVM Chair are beyond compare.” 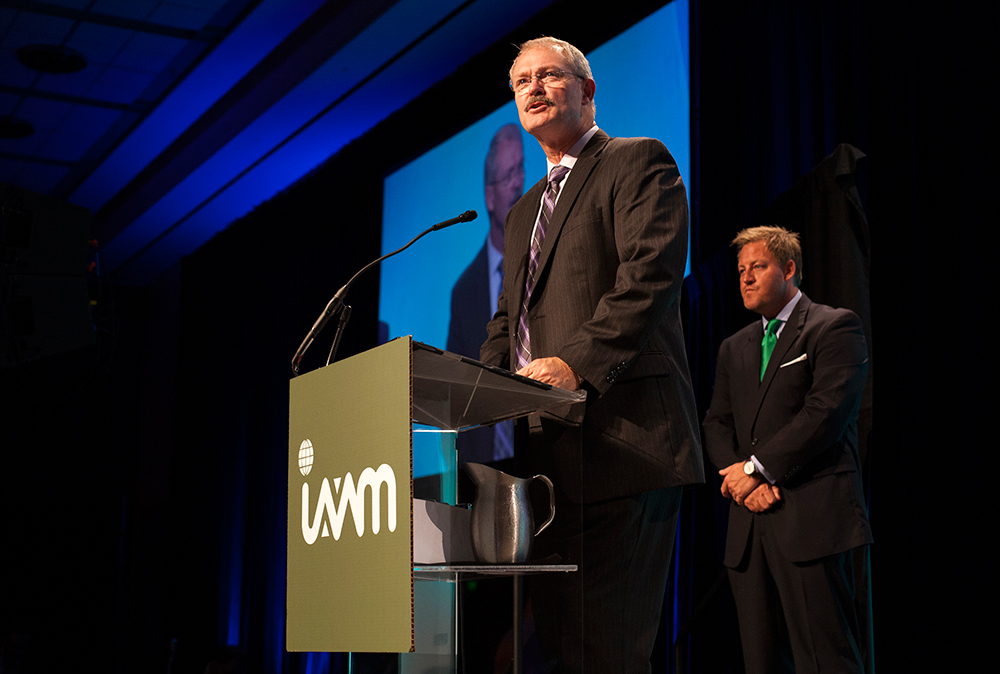 Jason Rittenberry, CFE, and Brad Mayne, CFE, were onstage at the awards luncheon for the presentation of the 2014 Legacy Award. The recipient, Joe Floreano, CFE, was unable to attend, but had already received the award during a special ceremony hosted by his venue, the Rochester Riverside Convention Center in New York. The ceremony in New York was recorded, and Floreano’s acceptance speech was shared during the luncheon followed by a standing ovation by attendees.

The purpose of the Legacy Award is to recognize significant contributions of an individual or company that benefit the mission and objectives of the IAVM Foundation, leaving a legacy for the advancement of the venue management industry.

“Joe Floreano truly embodies everything that the Legacy Award represents and more. Joe is a recognized industry leader, the ultimate professional, and a friend to all. Joe has consistently encouraged his peers to support the IAVM Foundation as a way to give back to the industry. He has led by example and inspired this commitment in others. This award could not go to a more deserving individual.”

Floreano’s legacy is legendary. He’s a past chairman of IAVM, a Charles A. McElravy Award honoree, and has received numerous awards and recognitions over the years from New York’s senate, assembly, and governor.

“Receiving the Legacy Award marks the pinnacle of a long career in an industry I love.”

Joe was unable to attend the awards luncheon, and his speech was filmed at the Rochester Riverside Convention Center in New York in June.

Michelle Rice, manager of the National Training Center at Oglebay Park in Wheeling, West Virginia, received the 2014 Ray W. Ward Award presented by the Regents of the Venue Management Schools. The honor recognizes an individual associated with the schools, whose dedicated service and extraordinary contributions over a period of at least six years have resulted in significant and long-lasting improvements to the overall success and quality of the schools.

“To receive recognition from the Venue Schools Board of Regents is significant as I highly value their professionalism in an industry closely related to the industry in which I have spent almost my entire career. Thank you so much. I’ll do my best to represent this organization according to the standards this award represents.”

Rice is a 20-year employee of the Wheeling Park Commission, with the past 14 years in the Continuing Education division of the National Training Center. She is instrumental in the planning and execution of the 15 professional training schools held at Oglebay Park each year.