“Our collaboration with State Farm is just beginning,” Koonin said. “From the incredible reach of this Million 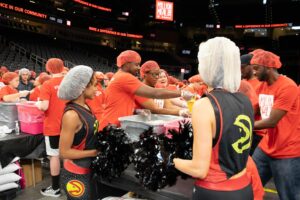 Meal Pack to the Hawks Court Renovations and State Farm Good Neighbor Clubs that we are creating at local recreation centers, we will continue to build even greater opportunities to bring together Atlantans to make a positive change in our community.”

“Atlanta is a special community and today shows why,” Krause said. “Thousands of our neighbors came here on a Saturday, not for a game or to be entertained, but to help us address the issue of food insecurity in and around Atlanta. Through this partnership with the Atlanta Hawks, our local agents and employees are thankful to serve a city who shares our commitment to strengthen communities.”

Non-profit Feeding Children Everywhere served as the logistics lead of the meal pack event. The organization, which is dedicated to creating a hunger-free world, provided statistics that show one in four children in Atlanta are facing hunger, while the number of high poverty neighborhoods in metro Atlanta has tripled since 2000, as the population has grown.

A little over a year ago, the Hawks and State Farm announced their official partnership, as the insurance market leader became the new naming rights partner of the NBA team’s home venue. Since the inception of the relationship, the two brands have been focused on creating small acts that collectively have massive impact, as part of the State Farm Neighborhood of Good®.