by R.V. Baugus
#atlantahawks, #statefarmarena, #vote, NBA
Comments are off

Fulton County is partnering with the Atlanta Hawks to create Georgia’s largest-ever voting precinct at State Farm Arena, starting with early voting on July 20 for the Georgia General Primary Runoff Election on August 11. This unique partnership will allow tens of thousands of voters to cast their ballots for upcoming elections while maintaining CDC-recommended social distancing requirements at the state-of-the-art facility. In addition, Fulton County Registration & Elections will conduct other elections support operations at the site, including absentee ballot processing and more. 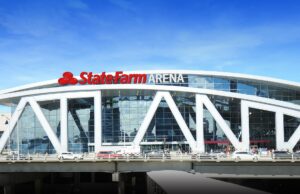 elections operations as part of their commitment to serving the community. The Atlanta-Fulton County Recreation Authority, a government agency, is the owner of the property and leases the site to the Atlanta Hawks organization. In addition to offering the venue, hundreds of Atlanta Hawks & State Farm Arena full-time and part-time employees will be trained to serve as election workers to further support the operations.

“Fulton County is grateful to the entire Atlanta Hawks organization for being an outstanding partner,” said Chairman Robb Pitts. “Tony Ressler, Steve Koonin and their organization have once again demonstrated that the Hawks are True to Atlanta”

In February, State Farm Arena was named the Best New Concert Venue in the United States by Pollstar Magazine and prior to that was honored by the International Association of Venue Managers (IAVM) with the 2019 Venue Excellence Award (VEA). For the second consecutive season, the Hawks finished with the NBA’s top ranking in overall in-game experience, a wide-ranging category made up of the following areas where the team rated highly: arena ushers, in-game entertainment, in-arena technology, in-arena retail, in-arena food experience and more.

“State Farm Arena is an ideal solution to help us serve thousands of voters while maintaining social distancing requirements,” said Mary Carole Cooney, Chairperson of the Fulton County Board of Registration & Elections. “We appreciate the Hawks for coming to us with this creative solution.”

To provide greater accessibility to voting, the Hawks Foundation will be providing free parking to individuals accessing the venue to vote. More than 1,500 parking spots surrounding the arena will provide complimentary parking for vehicles with a voter.