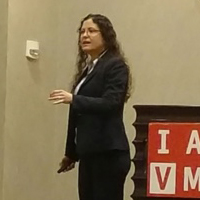 First things first. Dr. Tamara Madensen did not advocate in her keynote opening speech at the Academy for Venue Safety & Security to engage in any unethical or illegal tactics when she talked about how stealing solutions helps in her work as the Director, Crowd Management Research Council at the University of Nevada at Las Vegas. On the contrary, Madensen was implicit in emphasizing how being alert, reading other publications and understanding what is going on in other industries can only be beneficial as she gathers her data and conducts her research to assist the public assembly venue industry. As solutions are found to problems in those myriad other businesses, she looks to find if there is any application in her work, which there often is.

Then, there is the old tried-and-true method of trusting your gut, which is how she introduced her presentation.

“Research confirms that instinct is powerful,” she said. “You know when someone comes into your venue they may be trouble or they might have your back. At least you think you do.”

Madensen then led the class on a fun “gut instinct” exercise by asking groups which of three vehicles they thought she drove at a particular time, which of three hobbies she participated in and which of three gang groups were prevalent in her neighborhood growing up. To save Dr. Madensen in case she repeats this exercise we will not be providing answers, but suffice to say that the gut often did not win out, no matter how powerful research confirms it.

In short, her research focuses on why people act the way they do and the basic science and principles behind those actions.

She went through a series of situations that all venue managers encounter and then applied those scenarios to other vocations, which is essentially where her “stealing” of solutions enters as she observes and talks to people in those outside industries.

One example is de-escalation. Madensen noted how this is critical as well in the field of medicine, where doctors often deal with mentally ill patients and must exercise active listening skills, use minimal encouraging words such as “uh huh,” and “OK,” and other actions. This also applies to emergency room personnel who must be concise and respect personal space, and in the field of nursing as well.

“The gut instinct is great, but the things you learn here will give you some even better shortcuts,” she said.

In discussing tailgating, Madensen noted that research has shown that more than 40 percent of attendees are legally intoxicated before even entering a venue as a result of parking lot pre-game tailgating. The time period for this is considered from 150 minutes prior to 10 minutes after kickoff at a football game.

“How do venue alcohol policies influence tailgating activities?” she asked. “You could raise the price of alcohol, but that would only encourage more pre-game drinking.”

It is but one example of situations that are real to venue managers. While not divulging the answer to the above, Madensen ensured the audience that by the time they finished their four days of AVSS, they would be equipped for answering that and the other questions and challenges that she posed.