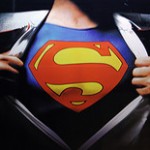 The AVSS Severe Weather Planning and Preparedness Conference is not until March 4-5, 2014, but it is one meeting that based on some of the content in the new Man of Steel movie, Superman and even his dad might want to attend.

When it comes to action, taking out bad guys, rescuing damsels and other such acts of bravery and heroism, the mild-mannered-reporter-turned-Superman (hey, I could go for that life!) is your guy. But in the movie when it comes to directing folks where to go when a tornado roars across a highway, meh, not so much.

Technically, it is Clark Kent’s dad, played by Kevin Costner, who urges his family and motorists to seek shelter on the highway underpass. Bad idea, dad, unless you want to be part of a wind tunnel effect.

“First, seeking shelter under an overpass is not a good idea,” noted Andy Bailey, warning coordination meteorologist at the National Weather Service in Kansas City, who emphasized he is not Siskel & Ebert but merely pointing out the bad advice given in the flick.

“Most overpasses don’t have a place to hide,” he continued, “and even if they do, wind speeds can be significantly higher there, and guess where much of the debris collects? Yep, right where you are seeking shelter. While it may sound a bit flippant, the best advice for those traveling when a tornado is near is to not be there.

“While it may sound a bit flippant, the best advice for those traveling when a tornado is near is to not be there.”

“On days with a high risk of tornadoes, travelers should keep abreast of storms and warnings, and avoid thunderstorms. With the numerous weather warning and radar apps available on smart phones, it’s easier now than ever to avoid severe thunderstorms. If you can’t avoid the tornado your best option is to abandon your vehicle for a sturdy structure like a house or well-built business. In these structures you want to get as low as possible and put as many walls between you and the tornado as possible. If a basement is available, that should be where you go. If not, look for an interior, windowless room like a bathroom or closet. Again, avoid exterior walls.

“Finally, mobile homes offer very little shelter from tornadoes and should not be used as a tornado shelter.”

Harold Hansen, IAVM’s director of life safety and security, said that, “There is a part of me that says, ‘yes, because it was in the movie, that is what some people might do, copying the behavior.’ But that is more likely to be kids or the untrained. It really is a bad idea and to portray it in a movie is not smart in the first place, but what are you going to do?”

For its part, Warner Bros. released a statement saying that the movie “is a work of fiction and events depicted in the movie are not intended, nor should they be seen, to offer any emergency preparedness advice.”

Regardless whether you are Superman or a manager of outdoor venues and events (hey, aren’t those one and the same!), it is never too early to plan to attend the 2014 conference. All the details are here.