Bill McElrath Calls It a Storied Career After 47 Years

The LinkedIn profile says it all about Bill McElrath: RETIRED at Des Moines Performing Arts.

That, folks, would seemingly say it all, but it really does not scratch the surface 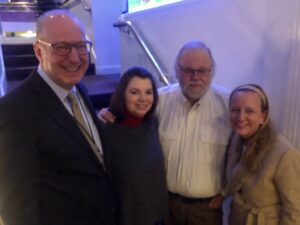 of the career of an industry icon who spent 47 years in the business, the last 20 as business director of said Des Moines Performing Arts (DMPA), where he served in two different time periods working in nearly every single department area.

McElrath also worked at the venue in 1979 as assistant manager, the same year he joined then IAAM to start a 31-year run as a dedicated volunteer and worked on the Association’s Certification Board for 14 years where he worked tirelessly to create the new Certified Venue Professional (CVP) designation.

After working with so many, I can say that there is a certain beautiful quality about IAVM members in the Midwest, many whom never leave the region to work in the industry while others like McElrath who go elsewhere only to return to those calling roots.

IAVM Chair Tammy Koolbeck, CVE, attended McElrath’s retirement celebration over the holidays to pay tribute to her long-time friend, and was happy to hear the accolades bestowed on McElrath by DMPA President and CEO Jeff Chelesvig.

McElrath, who graduated from Iowa State University in 1974 with a Bachelor of Science in Industrial Engineering with an added emphasis on Economics (there’s that business director link!), began his career at his alma mater in 1972 when he was recruited by Al Dyer to become a stagehand at the Iowa State Center.

After his stint at DMPA beginning in 1979, McElrath departed in 1985 to work first at the Salt Lake County Fine Arts Division and later the San Diego Convention & Performing Arts Center.

“He returned to DMPA in 1999 and has served in various leadership roles as our organization grew and evolved,” Chelesvig said. “His impact can be seen today in our organization and across our industry.

“As a dedicated Apple user, he oversaw the first all-Macintosh computer network in a performing arts venue.”

How is that for trivia and innovation? And it is also not surprising of a true Midwest gentleman who loved his work and loved his association.