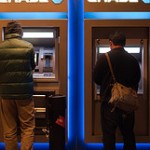 Woe unto the Automated Teller Machine. If these tried-and-true cash dispensers affectionately known as ATMs could ever have a voice, surely they would seek assault damages from thieves who try and steal them for being kicked, punched, tied up, dragged, shoved, tossed and yes, even cursed at.

Most of these thefts take place where machines are either outside or just inside the door of an establishment, which makes the case of the stolen ATM from the Henry B. Gonzalez Convention Center in San Antonio, Texas, even more remarkable in that the machine was pilfered from the second floor of the venue.

Even local police are baffled and unsure how someone could steal a machine from that level. Spokeswoman Sandy Gutierrez indicated a lack of video surveillance at this time that could help lead to an apprehension.

One conference attendee took note of the heist and mused that it would take a backhoe hooked up to an object to be taken from the second floor.

While police are familiar with ATM thefts mostly at convenience stores, the notion of a brazen theft from a convention center is certainly out of the norm.