The Performing Arts Center’s (PAC) Chris Miller is set to retire from his managing director role this October, after six and a half years. 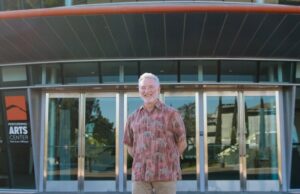 community arts organization clients and their events,” Miller said. “The unique partnership between the university, city of SLO, and the Foundation for the Performing Arts Center that created and sustains this world-class facility is a visionary model for other communities to emulate. I’m so grateful for the outstanding community support that the PAC enjoys and to have had the opportunity to facilitate its impact on our local artists and audience members over the past six years.”

During his tenure, the PAC saw financial success with operating surpluses each fiscal year, the only exception being the pandemic-shortened 2019-20 season. The PAC’s operating reserve balance has doubled, and nearly $2 million has been added to its Major Maintenance/Capital Renewal Fund.

Even with these successes, Miller is most proud of how the PAC staff overcame the significant challenges of the COVID-19 pandemic. With the severe financial impact of no live events during fiscal year 2020-21, the staff pivoted to provide critical support for pandemic response and testing on campus, and quickly developed the capacity to produce complex virtual events, including a concert series featuring local artists.

The PAC staff worked with San Luis Obispo City leadership to host the memorial service for fallen San Luis Obispo Police Detective Luca Benedetti – demonstrating the role the PAC plays in the life of the community, not only as a venue for world-class artists but as a home for its most important events.

Miller joined the PAC staff in May 2016, succeeding Ron Regier, who retired as the founding managing director earlier that year. Miller relocated to San Luis Obispo from Seattle, where he enjoyed a 30-year career in various performing arts and venue management positions.

From 2003 to 2015, Miller was the general manager for McCaw Hall at Seattle Center, the 2,900-seat home of Pacific Northwest Ballet and Seattle Opera. He oversaw the hall’s opening after a $127 million renovation, hosted nearly 400 events and more than 350,000 patrons every year during which time he built a $3 million capital renewal fund while achieving net operating surpluses each year. Prior to McCaw Hall, Miller served as theatre operations manager at Benaroya Hall, home of the Seattle Symphony, for two years. Prior to that he spent 15 years as Pacific Northwest Ballet’s company manager and director of operations.

Miller and his wife, Barbara plan to remain on the Central Coast for some time after retirement but expect to eventually return to the Pacific Northwest at some point, as family obligations warrant.