Kim Stone’s talents are obvious, and the Golden State Warriors and their new upcoming home Chase Center recognized that as the venue management professional and Executive Vice President of Business Development for the Miami Heat and American Airlines Arena was named General Manager of the new facility in the Bay Area.

Stone, whose profile story was shared in the March/April Facility Manager, brings her wealth of 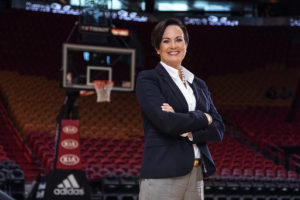 experience to the position in which she has direct oversight for all operations at the venue.

“Kim’s experience crosses most every aspect of the sports and entertainment industry,” said Warriors President and Chief Operating Officer Rick Welts in a release. “Chase Center will be a global destination and Kim’s vision and experience in guiding a world-class venue will add to the fan experience we aspire to deliver every day.”

Before being named EVP of Business Development last October, Stone served for 12 years as General Manager in Miami and led an arena that played host to four consecutive NBA Finals and was a top producer for concerts.

“I view this as an opportunity of a lifetime to join an extremely talented group of individuals who are creating this incredible state-of-the art venue in San Francisco,” Stone said in a statement. “Chase Center will not only serve as home of the NBA Champion Warriors, but also the biggest acts in entertainment as we aim to make this arena an international destination. Thanks to the vision of Joe Lacob, Peter Guber and Rick Welts, we hope to reimagine the event experience and create unparalleled excitement for the Bay Area and, really, the world.”

This will mark her first move to the West Coast. Stone has called Miami home for most of her professional career, save for two years when she served as Sports Publicity Director for the University of Texas women’s athletics department from 1992-94.

Stone’s accolades are varied and numerous. In 2013, Venues Today named her to their “Women of Influence” list and the Sports Business Journal has recognized her talents twice: as a “2016 Game Changer” and in June 2017 as a “Power Player In Venue Management.” In the summer of 2009, the South Florida Business Journal honored Stone as part of its inaugural class of “Influential Business Women.” And in 2014, Stone’s alma mater, the University of North Carolina at Chapel Hill School of Journalism and Mass Communications, inducted her into their Hall of Fame.