Claude Molinari, general manager of SMG/Cobo Center, announced an unprecedented partnership in Detroit as the Detroit Regional Convention Facility Authority (DRCFA) has awarded the naming rights of Cobo Center to Chemical Bank, the largest bank headquartered in Michigan. Chemical Bank and the DRCFA will announce the new name of the world-class convention center by the end of 2019, and the name will remain Cobo Center until that time.

“This unprecedented naming rights agreement is a great win for all parties,” Molinari said. “Chemical Bank makes a strong 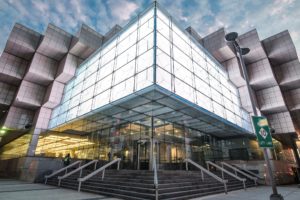 statement of commitment to the region and secured naming rights to a convention center that is growing in notoriety every day.”

The 22-year, $1.5 million-a-year agreement gives the bank exclusive naming rights for the center and sets a new industry standard reflective of the world-class facility and Detroit’s rise in the national market.

“This is the kind of unique collaboration and long-term commitment to the city of Detroit and greater region that can make a real, meaningful difference for Michiganders,” said Governor Gretchen Whitmer. “I’m eager to partner with the business community to make sure we bring more investment to our state, boost local economies in cities like Detroit, and connect more Michiganders to good-paying jobs.”

Chemical Bank being warded the naming rights of Cobo Center comes at an exciting time for the company. Chemical Financial Corporation recently announced its merger with TCF Financial Corporation which will be headquartered in a new 20-story building in downtown Detroit. The combined holding company and bank will operate under the TCF name and brand following the closing of the merger.

“Today’s announcement continues to build on our bank’s investment in the city, its neighborhoods, the region, and our state,” said Gary Torgow, Chairman of the Board for Chemical Financial Corporation. “Along with our recently announced merger with TCF Financial Corporation that will bring the headquarters of the combined company and the TCF brand to downtown Detroit, we look forward to contributing to make this Center a vibrant destination for our city and our region for many years to come.”

“Our world-class convention center now has a world-class corporate partner in Chemical Bank,” said Mayor Mike Duggan. “We couldn’t be more proud of the investments Chemical Bank is making in our city, from its new headquarters to its support for our Strategic Neighborhood Fund. Today’s announcement will help ensure our convention center remains a facility Detroiters will be proud of for years to come.”