No one really likes to be the person called upon to write obituaries. These are occasions of sadness when we talk about someone who has died. Around IAVM, I am that guy who 99 percent of the time is tasked with such writing. I actually welcome the calling, because mixed with the sadness is an opportunity to share about someone’s life, meaning, and impact on his or her family, friends, colleagues, neighbors, etc.

When long-time Amusement Business legend Tom Powell recently passed away, it was easier to find others to talk about the man they knew so well in the workplace. My words simply could not do Tom Powell justice. If you have not read Linda Deckard’s very moving tribute to Tom on the IAVM blog, please do so. You will, like me, get to know someone very well that you might not have really known.

Two other tributes came in that we are compelled to share. Don Muret, like Deckard, worked with Powell at AB and shared with us his reflections. We also heard from Greg Chiecko, president and CEO of the Outdoor Amusement Business Association, of which Tom served as news ambassador.

Before hearing from his friends, I can say I knew that Tom was quite involved in supporting the IAVM Foundation, 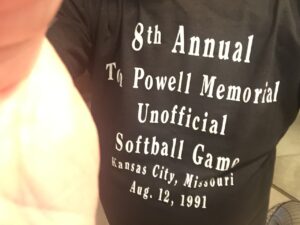 and we were fortunate enough to have received this photo from Tom’s long-time contemporary, Earl Duryea.

My relationship with Tom Powell dates to 1993, the year I first started working for the old Amusement Business. We bonded over our mutual love of baseball. I’m a Cub fan; Tom rooted for the Phillies and Red Sox. He also loved Notre Dame football.

Beyond sports, TP taught me a bunch about the live entertainment industry, particularly carnivals. It’s a largely misunderstood sector in terms of public perception, and as a result, there’s a ton of mistrust of the media from the show owners’ viewpoint. Tom through his vast experience helped me navigate those choppy waters and introduce me to key players in the business.

He provided me with sage words of advice, such as, “Never go anywhere without your camera.” Back then, years before cell phones, we used real cameras to shoot black and white photos. I learned that lesson multiple times after getting caught without mine when I desperately needed it capture a key moment for the magazine.

His work ethic was without peer and can be seen through the columns he wrote for the Outdoor Amusement Business Association up until his death. Most important, TP was a kind man and treated all with respect, cracking a few jokes along the way.

We kept in touch over the past several years and I would call him fairly regularly during baseball season to complain about the Cubs. TP, in turn, would relive the Phillies’ latest meltdown. Most recently, he would rib me about working for a monthly publication. He wondered, what was I doing now with all this time on my hands?

I consider myself lucky to call Tom Powell a friend and colleague. I’ll miss him deeply.

Chiecko did not have the same lengthy history with news ambassador, but nonetheless was saddened by the news of the passing. He shares these comments:

While many of you knew Tom Powell better than I did, I have known Tom for many years. I can tell you this, you will never find a person more dedicated to the Outdoor Amusement industry. Tom would write his column for us every week. A few times he was having some issues with his hands and he would have his daughter, Alice, transcribe his words.

Tom also knew everyone in the industry. Like clockwork you could expect a call from Tom after you played a date to find out how you did. People would also call him. Whenever someone had some news to spread a call to Tom was all it took.

Sue Gallup, in the OABA office, and Tom had a great relationship. Although they never met, they would trade sports stories or discuss current events. In one of Tom’s articles he wrote:

“I’m passing along a note from one of the nicest people I’ve ever worked with, and it’s all been by phone. I have never met Sue Gallup, OABA’s administration/member services manager, but I liked her immediately when she said she was a Boston Red Sox fan.

“She e-mailed me the following: I felt like I need to explain my reasoning to you as to why your article is so far down in the weekly Xtra. It’s because that’s what everyone is looking for! I have to make them look through everything else to get to you.

“They will read it no matter what, so you don’t have to worry about the scrolling to get there. I even asked someone last night if they read it when it comes in their e-mail and he actually told me, ‘To be honest, I only read it to see Tom’s article.’ So there you have it … it’s official. Maybe you could put in a plug next week urging everyone to read the whole thing, and encourage other members to do the same. I just can’t get over the amount of readership it has. I’m just kidding about the plug. I’m gonna get Greg on that one. Thanks, Tom, for all your articles. They definitely are fascinating to all in the industry. That’s one of the best compliments I’ve ever received.”

There will never be another OABA News Ambassador like Tom Powell. His wit, friendship and genuine love for people will be missed forever. Because of Tom Powell, this earth and this industry are in a better place. Godspeed Tom.