A year after launching its Last Straw campaign, Delaware North announced its plastic straw usage has been reduced by more than 8 million straws across its 200-plus operating locations in the United States. The campaign was launched on Earth Day (April 22) 2018 and was implemented as a commitment to reduce plastic waste by offering single-use drinking straws on a request-only basis.
|
“This past year was a tremendous step in our ongoing mission of cutting back on single-use plastics and waste in general,” said 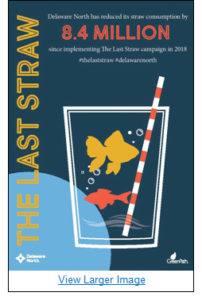 Deb Friedel, Delaware North’s director of sustainability. “With our operations encompassing such a large footprint, it’s important that we continue to take these steps to minimize our impact on the environment and this was a relatively simple step that has had great results.”

The Last Straw campaign was adopted at most of Delaware North’s operating locations as a way to cut down on the estimated 38.1 million plastic drinking straws the company uses each year. The program is one of the latest initiatives of Delaware North’s proprietary environmental stewardship program, GreenPath®.

Through GreenPath, Delaware North ensures careful management of its environmental impact by setting strict guidelines for energy and water consumption, waste management and other standards at its operating locations around world, which includes sports and entertainment venues, national and state parks, destination resorts and restaurants, airports, and regional casinos. Since its inception in the early 1990s, GreenPath has won dozens of awards from the likes of NASA, the National Park Service, the U.S. Environmental Protection Agency, and the U.S. Travel Association.