by R.V. Baugus
#ernestnmorialconventioncenter, neworleans
Comments are off

The permanent digital display, activated by motion-sensing cameras, is 28 feet wide and 13.5 feet tall made up of 42, 55” video 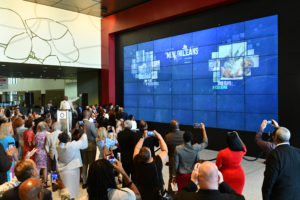 screens. The exhibit is designed to showcase the city’s rich cultural and historic heritage dating back to its founding days through a timeline that explores the people, moments and places that shaped the city and made it the unique and diverse “gumbo pot” it is today. Through touch, visitors navigate a series of descriptions, factoids, photographs and suggested cultural destinations that offer interesting and uniquely New Orleans experiences to explore beyond the Convention Center.

“Dutch Morial was a fierce defender of equal rights and led successful court challenges that brought an end to many segregation policies in Louisiana,” said Gov. John Bel Edwards. “We owe him a debt of gratitude. He recognized the importance of young people and the need for them to participate in the political process. As a result of his fight, the voting age in Louisiana today is 18. Last year, I was happy to join the Morial family and state lawmakers in celebrating the 50 years since he was a member of the Louisiana Legislature. I know this new exhibit will be an excellent opportunity to learn more about his contributions to our state and how they are still impacting us for the better today.”

According to Exhibition Hall Authority President Rodrigue, “The digital experience is designed to give visitors a taste of New Orleans’ history through moving images which highlight key themes and moments that have made New Orleans the treasure it is. A primary theme reflects on the important African-American experience over three centuries, including the Morial family’s civic legacy and leadership as the visionary behind making our Convention Center the economic driver it is for our city and state today.”

One of New Orleans’ most accomplished and determined Mayors, Dutch Morial, secured the funding needed to develop a convention center that supports economic development and the creation of jobs for the City of New Orleans. Through its 35-year history, the Convention Center has created over $86 billion in economic impact, $5.6 billion in new tax revenue for the state and local governments and supports more than 22,690 jobs annually.

“On behalf of my entire family, I want to thank the Exhibition Authority for its extraordinary efforts to bring this beautiful and thoughtful exhibit to fruition,” said Sybil Morial. “Highlighting the passion and vision that Dutch had for the Convention Center project and the City’s future economic development, makes it exponentially more special. The iconic New Orleans Morial Convention Center is a fitting location for a permanent tricentennial exhibit that demonstrates to the world the unique culture, history and civic and business life of our 300-year-old city.”

The digital wall was commissioned by the Authority in 2018 and was created by world-renowned design studio Gallagher & Associates, whose work is featured at the National World War II Museum, International Spy Museum in Washington, DC and other prestigious museums around the world.

In addition to the interactive exhibit, the Exhibition Hall Authority announced the creation of The Ernest N. “Dutch” Morial Award in honor of Dutch’s legacy advancing economic development and small business growth for the City of New Orleans.