In her presentation at the Arenas Welcome, Mary Haskett, CEO & co-founder of Austin, Texas-based Blink Identity, spoke about what venues need to know when it comes to recognition as well as shared some of the latest technologies becoming available.

Haskett shared a brief primer about how we see, beginning from birth and into our adult years. “Your eyes take in 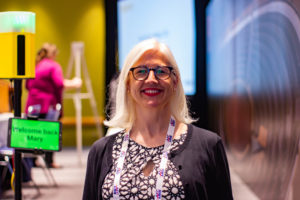 light signals and the brain processes that vision, almost from birth,” she said. “We see with our past experiences. Computers can’t do that.”

Haskett was introduced to facial recognition early in her career when she worked with the military and described their prototype as “giant.” The device on stage at her presentation was a small, compact box that can easily be placed where guests enter a venue.

When it comes to accessibility and reliability, Haskett said that identity is not 100% and it can never be. There are errors in biometrics, false matches, and non-false matches.

Haskett provided an example of a soccer match in Wales that was later reported by local media. A “watch list” was created of attendees in which 170,000 attendees were photographed in the crowd. Of 2,470 candidate matches, 2,297 were false matches while 173 were true matches.

“The media reported that 7% were correct and 93% were incorrect,” Haskett said. “Police said, ‘we found 173 criminals.’ For me, it is troubling that 2,000 people were being detained. If the criminal activity was a parking ticket, it is probably not worth it.”

Haskett covered the issue of privacy laws when it comes to gathering data on individuals, which she said is “still kind of like the wild west in most states.”

Only four states have laws concerning such laws, she said, with California set to enact in 2020. Illinois, Texas, and Washington are the others with laws on the books about gathering consumer data.

Haskett’s summary about privacy includes:
*Only collect what is needed
*Get real informed consent
*Only retain as long as is needed
*Use best practices for data storage
*Review frequently


“People want to be in control of how their data is used,” Haskett said.

Aside from the obvious safety and security implications, recognition can also be used to identify VIPs and make their lives happier. “That is going to create revenue streams for you,” she said.

Airports, of course, are among the first places people think of in the world of recognition. That application should only become more pronounced. “It is said that 99% of facial recognition is expected at airport gates by 2024,” Haskett said.

Indeed, the world of facial (and other) recognition continues to advance and goes far beyond how individuals merely recognize each other.

“We think we’re good at face-recognizing, but we’re really only good at recognizing people we know,” Haskett said.
It’s a new world today, and the applications of recognition continue evolving in the public assembly venues patrons attend.