As word spread about the death of Al Antee, CVE, earlier in the week, many who have known the industry giant for years and more likely decades expressed their sadness about the news of his passing. Many knew Al from working with him or studying under him at the then Public Assembly Facility Management School at Oglebay. Others served with him on Association committees while others proudly called him a dear friend.

“This is very sad news,” said Larry Perkins, CVE, CPP, CMP. “Al was a leader among leaders, a pioneer, and an all-around great 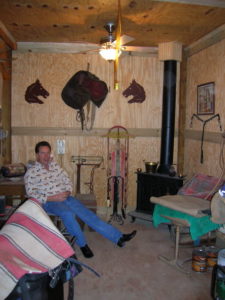 person. He loved his family and enjoyed his time on the ranch.”

“We all, particularly in this industry, have many mentors that have helped us along the way,” said Dexter King, CVE. “In fact, we each reflect the image of many of those that went before us and made an effort to ‘pour’ some of their wisdom, knowledge, and experience into us. Al Antee was not only one of those individuals, and there were many, that believed in me, he had the most significant impact on my professional career as anyone. Al Antee was the Chair of the IAAM Foundation when I first met him, via telephone, in 1986. At that time, he was in pursuit of founding an IAAM school in Wheeling, West Virginia, a legacy of his that is still very much alive today. Subsequently, as a senior officer of the association, he was involved in transitioning IAAM from a private management company, PM Hagar, to a self-managed organization. Al was also involved in the decisions and move of the IAAM office from Chicago to White Plains, NY, and then to Dallas/Fort Worth. Al loved this industry profoundly and made many enduring friends throughout his life. He poured his heart and soul into this association, moving it in quantum leaps ahead of where it might have been. The consummate dealmaker, he worked tirelessly behind the scenes to effect the best outcomes for the organization. Although not a high-profile volunteer in his later years, Al was often consulted for his wisdom and thoughts and did serve on the 2001 search committee for a new IAVM executive director. Al’s legacy lives on in many of us, carrying on his work of love vicariously.”

“He was a wonderful friend and mentor,” said Carol Wallace. “I have fond memories of his fireside chats at Oglebay. As a young event manager, he urged me not to be afraid to take risks with my career. May our Lord hold his family close at this time.”

“I knew Al back in the 1980s when I was an agent and he was at the Louisville Garden,” added Michael Marion, CVE, current IAVM Chair. “He was a promoter in Nashville and someone I liked a lot. Just a straight-forward and good guy.”

“I admired Al’s passion and willingness to speak out matters of the Association,” said Lionel Dubay, who enjoyed a visit at the Antee’s full of laughter and levity. “As a result of his leadership his contributions to our Association were many. Al was one of the leaders who helped us transition from private management of the Association to hiring our own executive director as well as helping with the establish of our professional Venue Management School at Oglebay. In addition, he was one of the leaders that was instrumental in starting the Crowd Management Conference as a result of the tragedy that took place at The Who concert. He was a leader who wasn’t afraid to take risks and he worked tirelessly on behalf of the Association. One of the most relaxing times I ever experienced was when I visited with Al and Sandie at their beautiful ranch several years back. My heart and prayers go out to his family. We lost a good man.”

“I am so sorry to hear this news,” said Donna Dowless. “Al was a true pioneer in our industry. Devoted and dedicated to serving the industry. We are a stronger industry because of his many contributions and service in so many ways.”

“VMA (Venue Management Association Asia Pacific) was host to Al in Melbourne when he was president of the then IAAM,” said Jon Benett. “VMAS was in its formative years and Al continued to be involved over a long period. A great bloke and he will be very much missed by many friends and industry associates. My sincere condolences to Sandie and the family.”

“My heart is truly broken to learn about Al’s passing,” said Beth Wade, CVE. “Al was not only a friend but my mentor. It was Al who pushed me to get involved on the Association committees and had me appointed to serve on the Foundation. It was an honor that shaped my career and opened many doors for me. Al was passionate about everything he did. Immediately following the 11 deaths outside the Riverfront Coliseum in Cincinnati in 1979 waiting for the doors to open at The Who concert, Al was at the forefront of organizing the Crowd Management Seminar (now the Academy for Venue Safety & Security) which was held in Louisville, his home at the time, for many years. The International Association of Venue Managers’ strengths today are because of members like Al Antee who saw a need and created solutions that are still viable today.”

“I remember meeting Al when he worked at the Louisville Gardens,” said Bob Skoney. “We had a lot in common with similar aging venues and seeking the same type of shows/events. Then he became President of the IAAM, and he was always a little irreverent as he began his opening acceptance speech at the annual conference by throwing his whole speech notes onto the floor in front of him and just winging his speech, which came from his heart and feelings about his passion for the industry. That was Al and he was a great guy.”