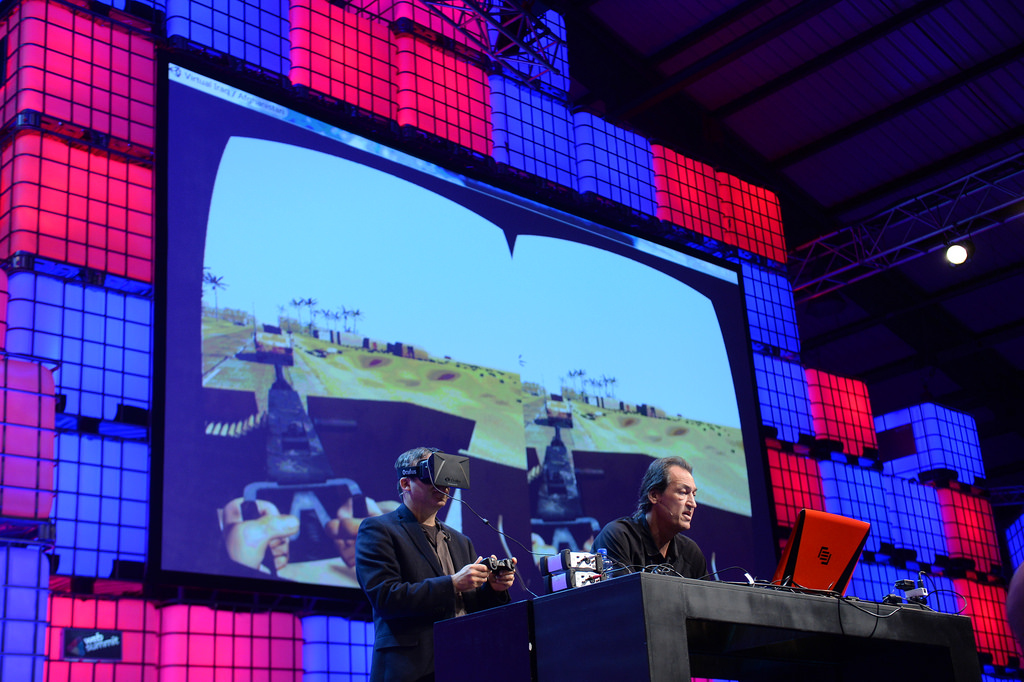 In “A Multitude of Realities,” FM contributor Michael Pinchera interviews Dr. Albert Rizzo about virtual reality technology and how it can enhance guest experiences. The following is some background on Dr. Rizzo and his work exploring technology and the brain.

Dr. Albert “Skip” Rizzo lost a lot of quarters and, ironically, brain cells playing Pong, Pac-Man and Galaga in bars. But while working at a brain injury-rehab center, around 1990, he was struck by the potential intersection of his interests.

“One day, I saw a patient bent over under a tree and I asked, ‘Hey Tim, are you OK? What have you got? What are you doing?’ He said, ‘The new thing, a Game Boy.’ And I watched him. I was seeing a 22-year-old frontal lobe injury patient that I couldn’t motivate to do traditional cognitive rehabilitation tasks for more than 10 minutes—and he was glued to this and had become a Tetris warlord! That’s when I first thought, ‘We need to gamify rehab tasks.’”

Shortly thereafter, Rizzo brought a Super Nintendo and the game Sim City to the rehab center, and the patients loved it—“They were going to town building cities!” That really got him fired up about the potential clinical uses for game technology.

“[Sim City] is the ultimate executive function-training thing,” says Rizzo, now a research professor in the Department of Psychiatry at the University of Southern California (USC), director of medical virtual reality for the school’s Institute for Creative Technologies, and associate editor of CyberPsychology & Behavior and the International Journal of Virtual Reality. “Executive function is really the brain of the brain—the frontal lobe activities that orchestrate your other cognitive functions into a unified game plan for solving problems. Every normal healthy person has executive function where they’re planning their day and they’re plotting their strategies and organizing—some better than others. Well, Sim City does all that and in a very clear way.”

Although he had to force himself to step away from playing video games as entertainment—“I got a little bit too into it and lost a girlfriend over a game I got hooked on, Contra III: The Alien Wars. I loved that game, man.”—his research marched on.

In 1995, Rizzo set up a lab at USC to explore how virtual reality (VR) and gaming technologies could be used in brain-injury rehabilitation.

“By 1996 or so, we had our first application—that also coincided with the first nuclear winter on VR,” Rizzo says.

In the super highly technological 1990s that introduced most humans to the Internet, inspired modern existential philosophy, and pop science fiction dystopian fare such as The Lawnmower Man, Total Recall, and Strange Days, much of the interest in VR collapsed along with media hype.

“The vision of VR was sound, but the technology just wasn’t there to deliver on it after 1995 when the bottom fell out,” he says. “But a lot of people in mental health and rehabilitation stuck with VR because it was unique, fascinating, and pointed a way to the future. Now I’m happy to say I think the technology has caught up with the vision, so we can do things we only dreamed about back then.”

VR first got clinical traction around that time to treat patients with anxiety disorders and phobias through exposure therapy—confronting fears in the context of safe scenarios.

“That blossomed into the post-traumatic stress disorder (PTSD) work,” he says.

A virtual Vietnam scenario created in 1997 showed promise in treating veterans of that conflict suffering from PTSD. And at about the same time that researchers working with a World Trade Center/Sept. 11 VR environment published positive results (2002), Rizzo started building Iraq and Afghanistan PTSD treatment simulations. (He was subsequently recognized with the American Psychological Association’s 2010 Award for Outstanding Contributions to the Treatment of Trauma.)

He says analyses of several studies found that VR scenarios outperform traditional imagination-only exposure therapy and could be as effective as real-world exposure therapy.

“Mental health, generally, is a shining area where it makes sense to use VR, because we’re taking an already-known principle (exposure therapy), an already known evidence-based treatment, and delivering it more—or at least as—effectively, but with a little bit more excitement and draw for patients.”

Further emphasizing the technology’s impact on the human brain, Rizzo says dramatic results have been realized in its use for pain distraction.

“You put somebody in a VR headset and give them a game-like activity to distract them from the pain and you see dramatic differences, dramatic drop offs in the perception of pain, even to the [extent that] when tested in an FMRI system you see less activation of the pain centers in the brain.”

About the Author
Michael Pinchera is an award-winning writer and editor specializing in business, technology, and pop culture topics.
Social Share