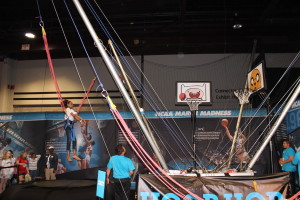 Riveting semifinals and a tightly contested NCAA Men’s Basketball Championship game won by Louisville over Michigan, 82-76, were certainly music to the ears for all involved in the planning and execution of this year’s Final Four played at the Georgia Dome in Atlanta with numerous ancillary events surrounding the games.

The sweetest music was saved for the clicking of turnstiles as 74,326 guests filed in to the Dome for the title tilt, setting a record for a championship game.

Just two nights earlier the semifinals broke a Georgia Dome basketball attendance record with 75,350 fans filling the venue, besting the previous record for a basketball game of 62,046 set on March 27, 1998 when the NBA Atlanta Hawks hosted the Chicago Bulls in one of Michael Jordan’s final games.

Indeed, there was something for everyone of every age to enjoy, which underscores why planning by the host city begins years in advance once the city knows the Final Four is coming to town. It explains why representatives from Cowboys Stadium were present for a week to soak in the experience first-hand in anticipation of hosting the Final Four in 2014.

But this year belonged to Atlanta and the city excelled in every area.

The Georgia World Congress Center (GWCC) specifically hosted Bracket Town, an interactive sports fan fest, and many other events including private parties, the media hub for the Final Four, the National Association of Basketball Coaches Convention, the staff check-in area, a sports bar and the Dome Dribble on International Plaza, an opportunity for thousands of kids to dribble their way through Final Four activities.

“It is vast enough that we simultaneously welcomed thousands of fans to Bracket Town and many other auxiliary events, yet compact enough that it only took five minutes to walk from Bracket Town to The Big Dance at Centennial Olympic Park, over to the Division II and III championship games at Philips Arena or to the championship at the Dome. You can’t beat it for an easily walkable fan experience,” said Zimmerman.

Bracket Town, the cornerstone event at the 3.9 million square-foot convention center, offered an affordable, family-friendly, indoor interactive event featuring 300,000 square feet of activities related to all NCAA sports, including basketball, hockey and lacrosse. Fans had the opportunity to meet legendary coaches and former college stars at autograph sessions, to learn new skills during daily youth clinics and to participate in three on three basketball tournaments. Bracket Town included a regulation size basketball court with seating for 2,400, and appearances were made by the Harlem Globetrotters, Cody Simpson and Kareem Abdul-Jabbar.

“Our complex is one of only a handful of campuses in the world that can boast both the best-in-class facilities and the connectivity to the downtown hotel district that allows fans of the Men’s Final Four to create their own walkable community in the middle of downtown Atlanta,” said Kevin Duvall, chief operating officer of the Georgia World Congress Center Authority.