Healthcare provider Kaiser Permanente became the latest partner for the Golden State Warriors when the NBA team moves into its new Chase Center for the 2019-20 basketball season. The company secured naming rights for the team’s 11-acre plaza.

Before the venue opens for hoops, it will play host to a Metallica concert slated for September 6. Golden State hosts its first-pre-season game versus the rival Los Angeles Lakers on October 5.

Kaiser Permanente is no stranger to the team as it is a current commercial partner with Thrive City, a community gathering place designed to bring people together from all over the Bay Area and provide health programs and services. Thrive is Kaiser’s health and wellness slogan.

The name Thrive City carries over as the official name of the district surrounding Chase Center, while Kaiser Permanente has 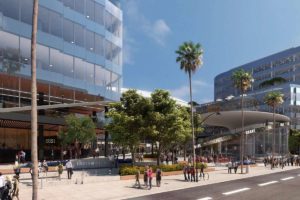 been named official team physician of the Warriors. Perhaps best of all in contrast to the team’s current Oracle Arena, which is limited in attracting fans outside of the venue itself, Thrive City will provide year-round health and wellness programming, including Get Fit clinics, yoga sessions, farmer’s markets, and ice skating.

Thrive City will also be highlighted by public art, including a signature piece by international artist Olafur Eliasson located at the East Entrance of Chase Center. “The first year of Chase Center will be an incredible year of discovery for the community as we’ll continuously roll out new programming, retail, restaurants and entertainment at Thrive City,” said Rick Welts, Warriors president and chief operating officer.

“We could not have chosen a better partner to activate the surrounding district at Chase Center as Kaiser Permanente’s focus and commitment to the community runs parallel with our vision for the project and this entire district. We know this will become a gathering place for everyone and are excited to see it come to life over the first year of operation.”

Thrive City will tip off later this summer with a Get Fit clinic and will continue with ongoing programming throughout the year. Thrive City will now be home to the retail stores and restaurants planned for the surrounding district, and will be unveiled over the course of the first year of opening.

“The Golden State Warriors are one of the most impactful brands in professional sports, and we are thrilled to join with them to improve the health of the Bay Area communities we serve through Thrive City, which will serve as a flagship presence and destination for total health,” said Bernard Tyson, chairman and CEO of Kaiser Permanente.

“Additionally, broadening our partnership with the Warriors to become the official team physicians demonstrates our excellence in sports medicine. Our leading team of sports medicine specialists will bring expert care to support the ongoing good health of the team.”