The Hawaii Convention Center enjoyed some very good news in 2017, posting a profit of $1.1 million, which was a $2.8 million improvement against the budget and nearly double the net income of $605,200 achieved in 2016.

AEG Facilities is in its fourth year of managing the venue and has welcomed record financial results during that time. 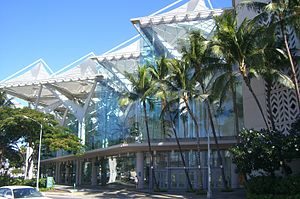 General Manager Teri Orton noted that the increases were in all offshore markets including association, corporate, international, and sports.

Sporting events continue to represent an opportunity for the center since its initial investment of $1.1 million in 2016 to convert 204,000 square feet of exhibition space into basketball, volleyball, and futsal courts.

The venue most recently secured agreements with three national sports organizations to host tournaments on the new courts, all of which begin this year. The portable sports courts can be configured to simultaneously stage up to 28 regulation volleyball or badminton matches, 18 high school basketball games or 11 futsal matches. The center also has a regulation NBA- and NCAA-approved basketball court with a solid wood floor.

Kelly Sanders announced Tuesday that he is leaving his post as area general manager of Marriott Hotels and Resorts Waikiki.

Mentors on the left and mentees on the right take full advantage of the seven minutes given for each meeting at the Bizwomen Pacific Business News Mentoring Monday held at the Pomaikaii Ballroom.

Home of the Day

The 1.1-million-square-foot center is funded by the Hawaii Tourism Authority, and has been managed by AEG Facilities since 2014.