Beginning with the 2018-2019 season, Herberger Theater Center will add three resident companies: Arizona Opera, Childsplay Theatre, and Arizona Broadway Theatre.  They will join the current robust lineup of resident companies (Arizona Theatre Company, Center Dance Ensemble and iTheatre Collaborative) and will ensure that there is something for everybody who wishes to attend an event at Herberger Theater Center. 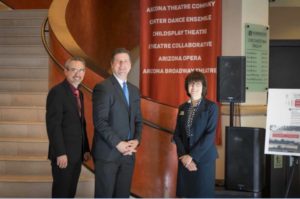 The addition of the resident companies will increase Herberger Theater Center’s events to more than 8oo annually and is expected to bring a 70% boost in overall attendance.  “It is growth in a time when the performing arts don’t seem to be growing as fast as other industries.,” Mettes said.

Arizona Opera is entering an exciting new chapter of artistic vibrancy and community engagement. “With this program expansion, we are increasing our commitment to presenting an adventurous, gutsy, and compelling repertoire of diverse works to inspire new audiences, while continuing to meaningfully invest in the cherished traditional operas known and loved by so many,” said Joseph Specter, President and General Director of Arizona Opera.

These new companies will add to the vibrant offerings of performing arts in Phoenix, as the Herberger Theater Center fulfills its vision to provide and support significant and relevant experiences and to serve as a premier performance venue, “Where Audience Meets Art.”