Hollywood Park, a near 300-acre sports and entertainment destination, and Live Nation have partnered in an exclusive multi-year booking agreement for its brand new 6,000-seat performance venue, the Performance Venue at Hollywood Park. The Performance Venue is part of the sprawling Hollywood Park mixed-use development in Inglewood, Calif., which is being developed by Los Angeles Rams Owner/Chairman E. Stanley Kroenke and will be adjacent to the new SoFi Stadium and American Airlines Plaza.

“The Performance Venue at Hollywood Park is a sophisticated, intimate venue that will host a wide range of 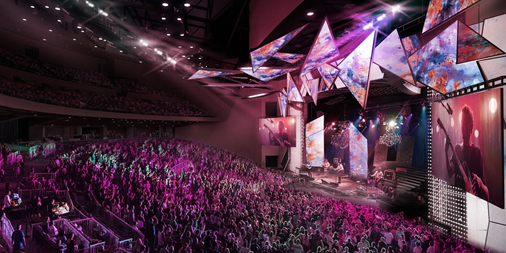 world-class events, including celebrated musicians, immersive entertainment, and close-knit community gatherings,” said Christy Castillo Butcher, SoFi Stadium and Hollywood Park’s senior vice president, Programming and Booking. “Hollywood Park is a true sports and entertainment destination, and our partnership with Live Nation will help us further our goal to deliver extraordinary entertainment to Angelenos and visitors across the globe.”

The state-of-the-art theater will host a variety of live entertainment from concerts to comedy, award shows, eSport competitions, community events, conferences, and more. Live Nation will be the exclusive long-term promoter for the theater, bringing the biggest and best names in music, comedy and entertainment to the all-new Los Angeles venue.

“We couldn’t be more thrilled to be the exclusive promoters of this incredibly dynamic venue coming alive in Los Angeles,” said Rich Best, Live Nation’s Regional Head of Talent for California. “Alongside Hollywood Park, we plan to make this a must-visit live entertainment venue and we can’t wait to unveil what is in store for this unique space.”

The Performance Venue at Hollywood Park is a 227,000 square foot, three-story indoor venue situated under the same roof canopy as SoFi Stadium and American Airlines Plaza, and it is seamlessly blended in at the canopy’s southernmost corner. Equipped with its own three-bay loading dock, the theater can operate independently or in tandem with the stadium and plaza for larger events. With three levels of seating, the venue can be configured to house three different crowd capacities, creating an intimate setting for events at 3,400 and 4,400 or full capacity at 6,000 seats. Complete with a two-story Kaynemaile chandelier, the theater will feature six luxury boxes, a 1,200 square-foot premium back-of-house hospitality space, with adjacent dressing rooms, and a 3,500 square-foot private club with 140 premium seats.

The Performance Venue stage is built with artists, events and fans in mind. At 6,100 square-feet, the stage is an expansive area for artists and events to be creative, and every seat is close to the action on-stage, with the farthest seat in the house only 164 feet away from the stage. The venue has a skydeck and rigging capacity of 200,000 pounds, which is a rarity for a building of this size. Equipped with luxury finishes throughout the venue’s interior and exterior, the venue features both an interior and exterior balcony for guests to enjoy. The exterior portion of the balcony has sweeping views of the mountains to the east, American Airlines Plaza, Lake Park and parts of Hollywood Park. The exterior of the venue features a sloping glass façade that reaches 42 feet at its tallest point.