The staff of the San Diego Convention Center will be starting the new year with new safety and security tactics, following recent training from two top experts in the conventions, meetings, and venue industry.

Mark Herrera, Director of Education for the International Association of Venue Managers (IAVM), and Paul Villotti, Director of Life Safety for 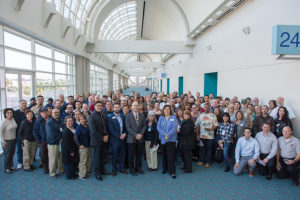 The trainings, held on December 14 and 15, 2017, is part of the San Diego Convention Center’s commitment to providing a safe environment to the nearly 900,000 attendees who visit the venue each year.

“Hosting events like this is important because it raises awareness levels among all staff including members of the team who may or may not have anything with ‘security’ in their job title,” said Josh Layne, Director of Public Security and Technology. “Training our housekeepers, grounds workers, engineers and concierge personnel works as a force multiplier. When all staff are actively thinking about security and know how to recognize when something just doesn’t seem right, it means that there are 100 additional sets of eyes looking for potential threats.”

The two days of training are part of the San Diego Convention Center’s commitment to working as partners with IAVM in a coordinated approach to protecting customers, guests, staff, and stakeholders within the convention and meetings industry.

The convention center’s leadership team, led by President & CEO Clifford “Rip” Rippetoe, CFE, and Executive Vice President and General Manager Karen Totaro, CFE, as well as its Board of Directors are working with the IAVM Industry Security Council.

“As a past Chairman of the Board for IAVM, I am completely immersed in ensuring our team is exposed to all the educational opportunities the IAVM offers,” said Totaro. “I have had the pleasure of participating in this expanded security training several times and worked with Mark Herrera and Josh Layne to make it a reality here in San Diego for our team and other community teams alike.”

“A great venue such as the San Diego Convention Center ensures that venue and security staff have regular training and also regularly test knowledge, skills and reactions in a variety of different situations,” he said. “Training, in particularly reality-based training, inoculates everyone to conditions that provide the tools and resources to better plan, prepare and recover to any condition.”

Herrera added that the San Diego Convention Center is part of an overall $283 billion industry, servicing millions of people who attend meetings, conventions and exhibitions across the country.

Rippetoe said that this training is just the beginning of a more holistic approach to security training, reiterating that every member of the team is critical to security.

“It is my goal that we take a lead role and a collective responsibility when it comes to mitigating risks and assessing threats,” he said. “We already have a strong collaborative relationship with our partners at the San Diego Police Department, Port of San Diego Harbor Police Department and the FBI. Our actions can help make critical infrastructures in and around the San Diego Convention Center that much safer.”