(Editor’s Note: IAVM Chair Rip Rippetoe, CVE, was interviewed for the December Member Spotlight by the California Travel Association. We both congratulate Rip and thank him for his story as well as his promotion of IAVM and the role it plays throughout the public assembly venue world.)

BY SHANNON BROOKS, PRINCIPAL AT FORWØRD

No doubt, the pandemic has had—and continues to have—a devastating effect on our industry, the economy, and the health and welfare of so many. Yet, it’s the abundance of creative pivots and heartwarming demonstrations of human kindness and generosity that have made getting through this challenging time more bearable and even enriching. The subject of our latest Member Spotlight, Clifford “Rip” Rippetoe, CVE, President & CEO of San Diego Convention Center, can attest to this. 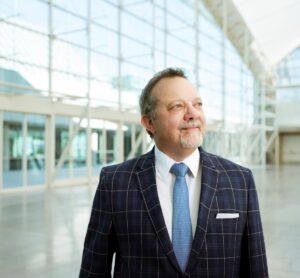 power of travel has not been diminished. Nor has the meetings and events industry coming to a relative standstill stopped the San Diego Convention Center from continuing to serve as a place of great value for San Diego residents.

The venue not only stepped up to serve as a critical super polling center for San Diego County during the recent elections, they also received a well-deserved Grand Golden Watchdog Award from the San Diego County Taxpayers Association for protecting the homeless during the pandemic as a key partner in the collaborative “Operation Shelter Home.” These are just a couple of the many impressive accomplishments that are a credit to Rip’s leadership of the San Diego Convention Center. Read on to learn more about our esteemed California travel industry colleague and some of the experiences and milestones that made him the man and leader he is today.

How did your career in hospitality/events begin?
I was a scenery and lighting designer for a summer stock theatre company, and then I was given an opportunity to operate a performing arts theatre in Kansas. Following that, I went to Las Vegas to run a theatre, an AAA baseball stadium, and an exhibit hall complex. That experience led to working in leadership roles at the Las Vegas Convention Center, the Salt Palace Convention Center, the Olympic Winter Games of 2002, a senior role at the Salt Lake CVB, Senior Vice President at GES headquarters in Las Vegas, The Kentucky State Fair Board, and here in San Diego.

What project(s) had the biggest influence on you personally and/or professionally?
I spent just under five years contributing to the Olympic movement. I had the opportunity to work for the Pan American Games in Winnipeg in 1999, the Goodwill Games in Lake Placid in 2000, the Olympic Games in Sydney in 2000, and then was responsible for all Spectator Services for the Olympic Winter Games of 2002. It was life changing. The movement instills character in ways I had not experienced before.

What accomplishments are you most proud of?
I currently serve as the Board Chair for the International Association of Venue Managers. I’m a 32-year member of the Association and have served in many roles. We represent 7,200+ professionals in over 21 countries. I am so proud to be in this leadership role. I have dreamt of it for all these 32 years. It is so humbling to be in this role. I am also very proud to be a father, grandfather, brother, and more for an amazing family.

Tell us something about yourself that might surprise people?
I completed a Masters in Divinity at the age of 59 and became an Ordained Minister within the Christian Church (Disciples of Christ).

How has the pandemic changed you as a leader?
I hope it hasn’t changed me, but instead I hope it has enhanced what I consider dear to us all—instilling hope and providing comfort to my team.

What three things kept you sane during the most “locked down” phases of quarantine?
My Wife. My Faith. And my Leadership team at the Convention Center.

What events are you most excited to see return once we can gather in larger numbers again?
All of them, of course. But I really am looking forward to Comic-Con International coming back to San Diego in a big way.