by R.V. Baugus
#cve, CFE, IAVM
Comments are off

IAVM and the IAVM Certification Board announced that effective February 1, 2018, the certification program known as Certified Facilities Executive (CFE) will be rebranded to carry the new name of Certified Venue Executive (CVE). The move comes following an October 2016 Certification Board meeting and a recommendation to IAVM President/CEO Brad Mayne, CVE, to make the name change to the more relevant title as it applies to the industry today.

“Several years ago, the Certification Board was asked to formulate and implement a certification program for mid-level managers in our industry,” said Jody Lake, CVE, chair of the IAVM Certification Board. “As we began the task at hand, one of the first and very important pieces was an appropriate title for this new program. It was an important decision and many discussions were held with several options considered. We talked at length to both current and past board members plus several respected IAVM colleagues both nationally and internationally. What quickly became clear by the majority was the term ‘facilities’ in any option of titles was outdated. Most comments were in favor of a reference to our industry title of ‘venue’ managers. It felt right and the board supported the term CVP, or Certified Venue Professional, for this new program.

“The question obviously followed of why then would we not want to update the reference to our highest and most prestigious of certification titles? We recognize and understand the deep and emotional ties to a title that has represented this pinnacle of designations for many years. We also acknowledge that if a title is no longer consistent with industry references, updating provides clarity and respect for this crowning point of achievement.” 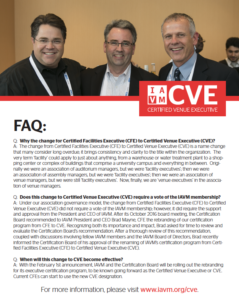 “Before making a final recommendation on rebranding, the Certification Board wanted input from current CFEs as to their thoughts on renaming the program,” he said. “In 2016, a survey was sent to current CFEs who were asked for input on the proposed change. Of those who responded, 58% supported the name change, 22% were neutral, and 20% were against renaming the certification program. With so many young, mid-level professionals earning their CVP, coupled with an increased number of individuals pursuing the CVE designation and the potential expansion of IAVM’s certification programs worldwide, this rebranding will serve to enhance the reputation of IAVM as the premier organization for venue management professionals and the CVE designation, its crown jewel.”

Bradshaw emphasized that the process was thorough and comprehensive and not one pushed through without full input from impacted stakeholders.

John Siehl, CVE, chief operating officer for VenuWorks and a past IAVM chairman, said, “The change to CVE seems very logical to me. All other references to our industry refer to the fact that we are venue managers. The top designation should maintain a consistent message. I applaud the work and research involved in this tedious process, knowing that the shift was not taken lightly, and was vetted through a survey to those directly impacted by the change.”