Charles P. “Charlie” Graviss, CVE, was a man known for giving nicknames for a number of reasons, said his son, Christopher Scott “Zeno” Graviss. In the passing of Charlie Graviss on June 16 at his home in Bakersfield, Calif., at age 92 from natural causes, we give ourselves a nickname for having known a man who loved the public assembly venue industry and who served as then IAAM president in 1976-77: blessed.

Chris said that his father passed away peacefully in his sleep in the presence of a precious granddaughter, Kimberly, who lived with Charlie and was a loving caregiver. Graviss was also a man blessed by children and grandchildren as evidenced by having six kids to go with 14 grandchildren, 13 great-grandchildren, and even one great-great-grandchild.

Chris called his father a “great mentor and someone who was very friendly. His mantra was ‘I’ll teach you anything I know if you’re willing to listen and learn.'” 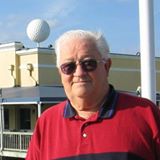 “He was always very open and sharing his experiences to help make people better at their jobs and to be better managers so they could prosper in the industry,” Chris added.

Charlie Graviss is best remembered by industry friends from his service at the then Bakersfield Civic Auditorium that started in 1983. It was a place that became familiar to the children and where they loved being with their dad.

“All us kids at one time or another were there,” Chris said. “I was the youngest. One reason that my dad retired in 1992 was actually so my oldest brother Chuck could get on there at the facility. The City of Bakersfield had a nepotism law back then, so my dad retired. My brother went on to work there for another 15 years and then he retired.

“Being there was cool. It was like a second home to us all. We kind of had the run of the place but we also had to show respect for anybody who worked there.”

Chris said that he also went to the Association’s annual conference that was in San Diego the year his dad served as president and that it provided him another memory that has lasted a lifetime.

“I was probably about 13 and I thought it was really fun because everybody was always so kind,” he said. “They actually let me drive the beverage cart going around the golf course during their golf outing. I just thought that was the greatest thing in the world.”

When it came to nicknames, Chris said that his dad bestowed them since he met so many people in the normal course of managing a venue.

“It was a way he could relate to people,” Chris said. “He didn’t want to be embarrassed by not remembering names, so he would associate something to them and give them a nickname. That was his way of always being very cordial.”

A sister, Becky, and mother, Betty, are deceased, but most of the remaining kids have their own nicknames they continue to carry with them as given by Charlie. Oldest brother Chuck is actually Charles Paul Jr., while brother Corky is Arthur and another brother Rusty is David. Sister Cyndi Moreno was spared a nickname.

As for Chris being called Zeno?

“He got a little bit more creative as he had children,” Chris said. “Back in the day people would go to name books and look at names for kids. I was the last of six and Zeno was the last name in the name book and was my dad’s way to tell my mom this was it!”

Chris said that a memorial service date is undetermined, but most likely will occur in August and that a future update would be provided about the service and any memorials or donations that might be made in his dad’s memory by his many friends in the industry and elsewhere.