It is with saddened hearts to announce the passing of Gunnery Sergeant Henry Bruce Thomas, USMC, Retired, 85, of Katy, Texas on Friday, November 20, 2020 at the Richard A. Anderson Veterans Home in Houston, Texas. He had been a patient there for one week. Henry was born on August 15, 1935 in Whigham, Georgia to William McKinley Thomas and Ethlene Trulock Thomas.

Henry proudly served his country as a United States Marine, serving in the Vietnam War, and retiring in 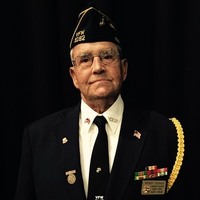 1971 at the rank of Gunnery Sergeant. He then had a long and distinguished career at the Summit/Compaq Center as Operations Manager, until his retirement in 2000. After retirement, he and Connie spent many years traveling and seeing the country in their RV. He was an active member of the Katy V.F.W. Post 9182, the American Legion Post 164, the Semper Fi Society of Brazos Valley and the Marine Corps League of Katy, Texas.

Henry’s vibrant personality, endless work ethic and caring heart led to a remarkable life and he will be missed deeply by family and friends. Henry was of the Southern Baptist faith and attended First Baptist Church of Katy.