It is with great sadness that the American Society of Association Executives announces the passing of its President and CEO John H. Graham IV, FASAE, CAE, after an extended battle with cancer. On behalf of ASAE’s Board of Directors, staff, members, industry partners and other stakeholders, we extend our deepest sympathies to John’s family.

While no words can adequately express our deep sorrow at losing our leader, the ASAE team is profoundly grateful 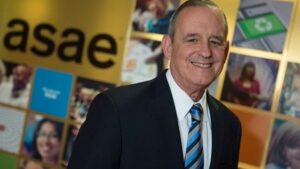 for the opportunity to know and work with John. Graham was a transformative leader for ASAE and a mentor to many in the association community. During his tenure, which began August 1, 2003, ASAE more than doubled its membership and developed a wealth of innovative products and services to benefit association professionals and their partners. Graham leaves behind an organization marking its centennial in 2020, and his spirit will forever be the foundation of ASAE’s work moving forward.

In his acceptance of the 2013 Association TRENDS’ “Association Executive of the Year” award, Graham touched on why he found association management such a personally rewarding profession.

“Whatever our personal journeys have been – however we came to embrace associations as our life’s work – we can take great pride in the advancement of this profession,” Graham said. “Our organizations comprise an incredibly innovative, vibrant and diverse sector, and we see innumerable examples every day of how associations effect positive change – not just for the industries or professions they serve, but for society at large. America is quite simply a better place to live and work because the association community is leading the way in areas like professional development and credentialing, standard setting, community assistance, research, and volunteerism.”

Before ASAE, Graham served the American Diabetes Association in Alexandria, VA, for 24 years, the last 13 as chief executive officer. In his tenure as CEO, ADA quadrupled in size, from $50 million to $200 million in annual revenues and successfully moved from 53 independent, separately incorporated affiliate organizations to one nationwide organization with one staff, one budget and one plan. Before joining ADA, Graham served the Boy Scouts of America for nine years. In May 2015, he was recognized by the Boy Scouts of America as a Distinguished Eagle Scout. Graham served on the Association Committee of 100, U.S. Chamber of Commerce; as chairman of the Mobile Giving Foundation Board of Directors; on the Board of Directors of the Lambda Chi Alpha Foundation; and as President of the National Capital Area Council, Boy Scouts of America.

The Graham family will hold a private service for John in Pennsylvania and a memorial service in Washington, DC, will follow.

In lieu of flowers, contributions may be made in his memory to organizations that were particularly important to him, including:

Arrangements are by R. L. Williams, Jr. Funeral Home, Inc., 3440 Skippack Pike at Cedars Rd., Skippack, PA. Online condolences may be made to the family at www.RLWilliamsFuneralHome.com.

With John’s passing, the ASAE Board has announced that Susan Robertson, CAE, will continue to serve as interim president and CEO of ASAE.

John Graham, ASAE President & CEO, Dies… John H. Graham IV, FASAE, CAE, has died after an extended battle with cancer. Graham’s tenure as the head of ASAE began on Aug. 1, 2003, and with Graham at the helm the association more than doubled its membership. Graham was previously the CEO of the American Diabetes Association. His family will soon hold a private service in Pennsylvania. A memorial service in Washington, D.C., will be held at a later date, ASAE said.