Thaxter R. Trafton, of Rockland, ME passed away in Camden with his wife, Linda, by his side on July 25, 2021, from complications of Lewy body disease. He was 84. Thaxter was born in Danforth, ME on January 5, 1937, to Leone Fitzpatrick and Elton Trafton.

A graduate of Morse High School and Maine Central Institute, he earned his business degree from Husson College.

Thaxter was a competitive athlete, and his career as a teacher and coach at John Bapst High School kindled 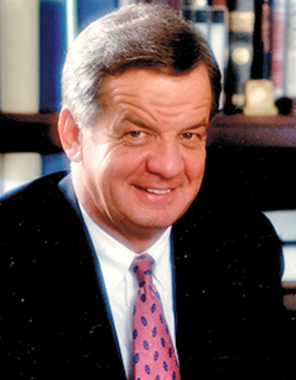 a lifelong passion for motivation and development of all he mentored. Throughout his personal and professional life, he nurtured the potential of those with whom he came in contact. This is underscored by the devotion of family and friends, and the legion of students, employees and acquaintances which attest to his leadership. He was an exceptional individual.

Thaxter became the Parks and Recreation Director for the City of Bangor from 1965 until 1980, including five years as the Executive Director of Bass Park, which included the Bangor State Fair and Raceway operation and the overseeing the building of the Bangor Civic Center. In 1980, he was named the Director of the Arizona Veterans Memorial Coliseum and the Arizona State Fair. During his tenure, he also served as the president of the Western Fairs Association.

His lifelong affinity for sports was realized from 1985 to 1988 as president of the NBA Cleveland Cavaliers, during which time he accomplished several notable NBA firsts in professional sports administration. After serving as president of the RACAM amusement company in Phoenix, Arizona, he became the owner and president of Trafton & Associates, which operated the Santa Monica pier amusements and Shamrock Shows in southern California.

Thaxter is predeceased by his parents; and his brothers, Blaine and John. He is survived by his loving wife of 28 years, Linda Pinney Trafton. They were married in Alta Loma, CA in 1993. He also leaves behind Mona Herbert Trafton, mother of his four children. Thaxter is survived by his four children: Tony Trafton of Murrieta, CA and his 4 children and 3 grandchildren; Teresa Armstrong and her husband, Mark Armstrong, of Woodbridge, CA, and their 4 children and 2 grandchildren; Mark Trafton and his life companion, Shauna Yergensen, of Las Vegas, NV and his 2 children; and Alan Trafton and his wife, Jennifer, of Lake Forest, CA and their child. He is also survived by his three stepchildren: Cynthia Hays of Livonia, MI, and her 2 children; Matthew Pinney and wife, Denyse, of Solon, OH and their 2 children; and Andrew Pinney and wife, Amy, of Broadview Heights, OH and their 4 children. He also leaves behind 5 great grandchildren. He will be fondly remembered by many nieces, nephews, and close friends.

A Celebration of Life will be held in the Knox County Ballroom at the Samoset Resort in Rockport, ME on Sunday, October 3, 2021, from 1-4 p.m.

In lieu of flowers, memorial donations may be made in Thaxter’s honor to the Maine Sports Hall of Fame at P.O. Box 2, Cumberland, ME 04021 or online at mshof.com/donations.