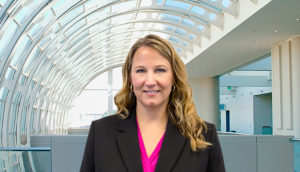 Wednesday, January 24, 2018. She will succeed outgoing Senior Vice President & CFO Mark Emch, who announced he will be retiring from SDCCC following a 24-year career.

Mattix, who was previously the Corporation’s Controller, was selected following a nationwide search. She graduated from Western Washington University with a Bachelor of Arts in Accounting and moved to San Diego in 1998. Shortly thereafter, she started her career at the Convention Center as a Division Assistant in Event Management, had a brief stop in Sales and Marketing as an analyst and then worked her way up in the organization through Accounting and Finance.

“We are thrilled to have Mardeen as our new CFO,” said Clifford “Rip” Rippetoe, President & CEO of the San Diego Convention Center Corporation. “She joins our executive team, having been promoted through the ranks within the facility. Mardeen leads by example and is well respected within our organization.”

“There are so many exciting opportunities coming our way in the industry and here in San Diego,” said Mattix. “I look forward to my role as a member of leadership and I’m proud to be part of such a talented team planning strategy for the San Diego Convention Center. I plan on using innovative ideas to help us drive success to the next level.”

Mattix has led the Convention Center through many successful audits, has served leading roles in system technology integrations and has been instrumental in improving business processes throughout the Corporation. 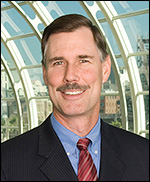 Emch announced his retirement plans in the Fall of 2017. He joined the San Diego Convention Center Corporation in 1994. He graduated with a Bachelor of Science from the University of California, Los Angeles and received his Masters Degree in Business Administration from San Diego State University.

“I’m very proud to have been a key part of a dynamic and incredible team that has had a huge positive impact on San Diego and brought smiles to hundreds of thousands of people per year as they have attended our events,” said Emch. “It’s been a remarkable 24-year long ride.”

“Mark has been key in the efforts of the San Diego Convention Center Corporation to promote transparency as well as the economic benefits that come from hosting conventions. He is known for his ambition to find ways to improve not just our business, but the convention and tourism industry as well,” said Rippetoe.

Mattix began her role as Senior Vice President and CFO immediately upon the ratification by the Board of Directors. Emch will transition out of his former role by assisting on special projects.