When Zane Collings, Assistant General Manager of the VyStar Veterans Memorial Arena in Jacksonville, Fla., managed by ASM Global, thought back to the last event held in 2020 at his venue, he had to pause before answering. After a few seconds, Collings recalled that it was an East Coast Hockey League game involving venue tenant Jacksonville Icemen in a March contest.

That is, until the venue scored a major draw back on May 9 when Ultimate Fighting Championship (UFC) 249 was 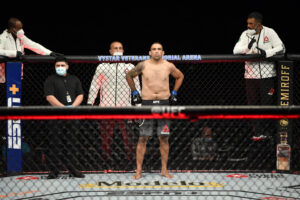 JACKSONVILLE, FLORIDA – MAY 09: Fabricio Werdum prepares to fight Aleksei Oleinik of Russia in their heavyweight fight during the UFC 249 event at VyStar Veterans Memorial Arena on May 09, 2020 in Jacksonville, Florida. (Photo by Jeff Bottari/Zuffa LLC)

held on May 9 with no fans but with a television audience of more than 700,000 shown on ESPN+. As we all know, this was firmly inside a time frame when COVID-19 was all the news and concern, much as it still is today.

It marked the venue’s first hosting of UFC since the arena doors opened in 2003, but it is safe to say the sport will be coming back to Jacksonville and the venue after a successful visit. Collings shared everything involved in putting together the event on an IAVM Arenas Town Hall, and more recently took some time to chat some more about the experience.

We have to ask off the bat how the venue came to host UFC 249?

It took a number of folks involved. First, it took a progressive governor in Ron DeSantis and a progressive mayor in Lenny Curry to want to be open to sports events in the state of Florida. We have them to thank for that. It started with a conversation from the president of ASM Global, Bob Newman, and Peter Dropick (Executive Vice President, Event Development & Operations) at UFC. They were looking to start some live TV events, because at that point they had been shut down in the state of Nevada at their training facility. Bob Newman said, “How about Jacksonville?” Between the folks in the city working their part with the athletic commission and my boss, Bob, and Bill McConnell, working with UFC, we were able to put things together.

How much lead time did you have to get everything organized and ready for UFC to come to town?

We had about three weeks lead time. The short lead time is a challenge that you have to overcome in the industry we are in. You plan as best you can and then you have to overcome what you don’t know. The challenge here was trying to figure out how to do it safely. That was the main goal. How do we open back up even though there are no fans? How do we open back up and do it safely? The challenge was using all the information from ASM, developing protocols here locally, working with UFC because they have their own set of protocols and melding them together and then having the local and state authorities approve it. It was a teamwork approach and we couldn’t do it with anyone better than UFC. They are a real button-up organization in having their stuff together.

And the last event you held before UFC?

You would think I had that etched in memory. The last four months have been a blur. It was the Jacksonville Icemen in ECHL hockey.

Talk some about protocols from your needs and applications.

We had to go through the daily health questionnaire and temperature screening, but also short-term and long-term antibody testing before they worked the first run of shows. These included mandatory masking, blood tests and nasal swabs.

You shared quite a bit of valuable information for attendees at the Arenas Town Hall, including cleaning, catering, social distancing, and much more. What were some of the questions that attendees asked?

I had a lot of questions in regards to where do we get the testing, where do we get the electro-static disinfecting gun and how much it cost, what kind of chemical is in there. Is the test required or do we just do it? It was probably a combination of both. When we work through the process, we required of ourselves because the ultimate goal was doing this safely. We put our own protocols into place, because no one ever said we require you to do this. So, the goal was to do this really safely and that costs money. There were also questions about catering. You don’t do buffets and you’re not gathering people. The meals were for fighters and staff, too, provided by our caterer SAVOR. The best way to explain it is a to-go order from a restaurant.

What feedback did you receive from UFC after the event?

What is it like in an arena with no fans as far as any noise goes?

I learned that the guys who work the corners talk a lot. It can still be loud when there is no crowd. You hear every cuss word. You hear every hit. When you hear flesh on flesh and you see the dude get knocked out, it’s just different.

Finally, what takeaways can you offer your colleagues after having successfully hosted a major event like UFC in such a time of uncertainty?

Do your research because there’s a lot of information that’s out there now, and do what’s right to produce a safe event, because that’s what we do.

To Collings’ point about UFC wanting to return and their experience at the venue, please enjoy this brief video by clicking here.