Jimmy Earl, CFE, has been named Senior Associate Athletics Director of the Frank Erwin Center by Texas Athletics. Earl is only the third individual to lead the Frank Erwin Center since the building’s doors opened in 1977. Earl was the arena’s first Events Manager and has more than 40 years of experience in the facility management industry.

“Jimmy’s accomplishments and expertise are invaluable as we transition leadership of the Frank Erwin Center,” said Men’s Athletics Director Mike Perrin. “Under Jimmy’s leadership, we will celebrate the 40th year of this great venue as it continues to be the home of the Texas Men’s and Women’s basketball programs along with providing Central Texas with the best live entertainment options.”

In addition to his experience at the Frank Erwin Center, Earl was the Manager of the Fort Worth/Tarrant County Convention Center from 1987-1990. He is 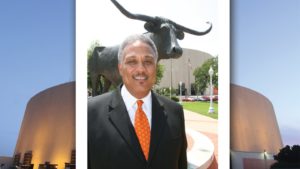 also a past president of IAVM. In 2016, he was awarded IAVM’s Charles M. McElravy Award, which is given to a Professional, Honorary, or Retired member of IAVM who, in the opinion of the Board of Directors, has made the greatest lifetime achievement to the welfare of the Association or profession. He is a 1993 graduate of the Public Assembly Facility Management School at Oglebay, attained the Certified Facilities Executive (CFE) designation in 1995 and attended the Senior Executive Symposium at Cornell in 1997.

Earl also completed the Leadership Austin program in 1994 and has served with the Austin Arts Commission, the UT Mentor program, as President of the Pflugerville Education Foundation and on various boards in Austin, including Austin Recovery.

Congratulations to one of our industry’s true professionals and a leader in every sense of the word!