While volunteers worked feverishly behind him to set up 5,000 cots and provide each bed with blankets, Dallas Mayor Mike Rawlings stood on the bare concrete of an air-conditioned parking garage at the Kay Bailey Hutchison Convention Center in Dallas, addressing a throng of media about the city’s opening its arms as a mega-shelter for those able to leave the path of destruction along the Gulf Coast caused by Hurricane Harvey, a Category 4 storm that made landfall last Friday night and has lingered in the coast area since then, dumping record amounts of rain throughout southeast Texas.

“We are getting ready to be the neighbors of south Texans that we know we can be,” the mayor said to begin his remarks on how the 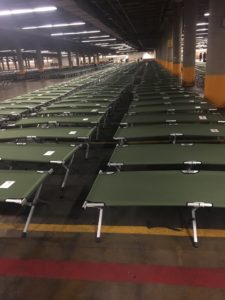 Cots sit ready for up to 5,000 displaced residents.

city would prepare to accept thousands of displaced residents. That 5,000 number, the mayor admitted, could climb into the tens of thousands and cause other shelters in the area to be looked at for any overflow population.

But that is for a future day. This day was about Houston’s neighbors up I-45 in Dallas coming to the aid of a population that has experienced flooding never seen before. Houston, in fact, set daily record rainfall amounts on Saturday and Sunday and is expected to take on an amount of rain before the week is over that normally falls over the course of one year.

With search and rescue operations in full swing in Houston, nearby Dickinson and in many other cities, and with the George R. Brown Convention Center in Houston already sitting at 4,500 residents and nearing its own 5,000 capacity, others are stepping up in the most humanitarian way.

Our job is to be ready when and if individuals need to come to the Dallas area to reboot their lives and get back on their feet,” Rawlings said. “My heart goes out to all the people impacted by this devastation.”

Rawlings said that he has been in contact with Houston Mayor Sylvester Turner to assure his counterpart that Dallas is ready to help.

“Houston has a convention center, recreation centers, churches,” Rawlings said. “That area is still 6.5 million people, though. The numbers get pretty staggering.” 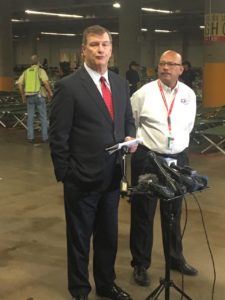 Rawlings has also spoken with the mayors of Austin and Fort Worth and said that Austin has been told to prepare for up to 7,000 people.

Kay Bailey Hutchison becomes the fourth shelter to open in Dallas along with three recreation centers. Rawlings said that 47 local firefighters have been dispatched to south Texas to help in the rescue and have been manning some of the boats that have been so prevalent on television coverage.

“Wal-Mart is setting up a pharmacy for us here in the convention center and there will be a medical facility on the other side. We can triage if necessary and send individuals along to hospitals in the area,” he said.

Rawlings said that it is impossible to predict how many people will end up in Dallas.

“We will know more about that over the next few days,” he said. “Interstate 45 is flooded in Houston and it is still raining there. We don’t know when 45 will free up. They have 250 buses ready to move. It could be 48 hours before they can even begin moving people from there. We are preparing, though. We may have tens of thousands upon thousands upon thousands of individuals. If that happens we will be looking at other partners in the county to help.”

Rocky Vaz of the Dallas Office of Emergency Management said that preparations have been made for those bringing their pets.

“The SPCA is getting a base ready just like we’re getting a shelter ready,” he said. “This will likely be on the fourth floor of the old Reunion Arena parking garage.”

Rawlings said that the city and the venue are concerned on the short-term and being ready to immediately help people when they arrive. He added that his team will convene in a couple of weeks to look at any long-term decisions that need to be made.

“Our hope is to stage individuals as they arrive,” he said. “We might put them in one of the rec centers and move them here. Right now there are 200 empty beds between the three shelters.”

With many discussing whether a mandatory evacuation should have been made for the city of Houston, the mayor had his own opinion.

“Thank God there was not a lot of people on the roads when the floods hit,” he said. “There would likely be many more deaths than have occurred so far.”