Moore’s appointment coincides with ASM Global’s ambition to define the future of convention centers through innovative strategies. These include technology enhancements, experiential activations, and integrations that unite business and leisure experiences. As general manager, Moore’s focus will be on providing strategic leadership that goes beyond day-to-day operational management—an area in which he has excelled—to creating new programs and partnerships that differentiate Chicago as the destination of choice for the next generation visitor.

“Implementing innovative ideas, leaning into the reality of hybrid events, and working with the MPEA, 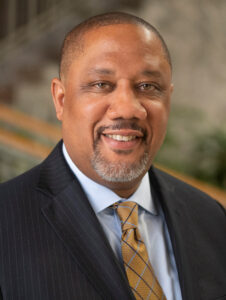 Choose Chicago and McCormick Place teams to fully optimize the overall guest experience are high on our list of priorities,” Moore said. “Event organizers have evolving needs and having the ability to leverage the resources of ASM Global while working with our customers and strategic partners to help usher in this new era is beyond exciting. There is no better place to lead that effort than McCormick Place.”

Moore, a 30-year facility-operations veteran, has held leadership positions at convention centers, stadiums, and multipurpose facilities throughout the United States, most recently as regional vice president and general manager for ASM at the Pennsylvania Convention Center. Prior to his time in Philadelphia, Moore was in Chicago as regional general manager for the Festival Hall Complex at Navy Pier. His operational successes, fiscal stewardship, and production expertise will all be critical factors in his new role.

“Kelvin is an industry veteran and visionary leader with the institutional knowledge necessary to lead one of the most important convention centers in the world,” said Dan Hoffend, executive vice president of convention centers for ASM Global. “His track record of enhancing operational efficiency at various convention centers across the country is second to none. He has big shoes to fill, but we are confident he will pave the way for what we expect to be a new and exciting era for McCormick Place.”

Moore succeeds David Causton who has served in the role of general manager since 2004. During his tenure, Causton oversaw strong revenue growth as well as the convention center campus expansion including planning and construction of the McCormick Place West Building, which greatly expanded the convention center’s capabilities, and the construction of the 10,000-seat Wintrust Arena.

“We are thrilled to welcome Kelvin Moore to the McCormick Square campus,” said Larita Clark, CEO of the Metropolitan Pier and Exposition Authority (MPEA), owner of McCormick Place. “McCormick Place has rebounded from COVID, welcoming more than two million guests with an economic impact of more than $1.8 billion in the past 18 months. Our calendar ahead is robust, and it will be great to have Kelvin at the helm. As a CEO committed to diversity, equity, and inclusion in the events industry, and as MPEA’s African American CEO, I am also thrilled that Kelvin will be the first African American general manager of McCormick Place.”

“I’m excited to return to Chicago and reconnect with the business, tourism and labor sectors who are critical partners to surpassing pre-pandemic event volume and attendance levels,” Moore said. “Working with MPEA, we have a great opportunity to think and act for the future. The time is now.”