He wanted a statue, but got a urinal instead.

Former Warriors player Tom Tolbert took a tour of Chase Center on Thursday. After jokingly asking for a statue in his honor to be on the premises of the soon-to-be Warriors’ new home, Tolbert was instead “honored” with a ceremonial first flush in the venue’s media room restroom.

“Tom, as General Manager of Chase Center, it is my distinct pleasure to dedicate a urinal to you,” said Chase Center General 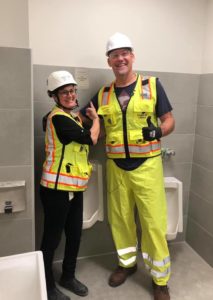 While some might view it as a dig, that wasn’t the case for the good-natured Tolbert. Instead, the longtime Bay Area sports radio host who played three of his seven NBA seasons with the Warriors (1989-92), and former Warriors radio analyst, took the honor in stride.

“I’ve got to tell you, it’s quite an honor. Ever since I was a little kid, I never dreamed of playing in the NBA, that dream was too big for me, but to have my own urinal, wow,” said Tolbert. “The only misgiving I have is that I went to the bathroom right before I came, so I won’t be able to dedicate it in the manner that’s appropriate for a urinal. So, we’re gonna do the best we can.”

“Where are we going to put this [plaque]? We want people to see it. When they walk in here, right? I mean, all the greats — Tim Kawakami, Marcus Thompson, Bruce Jenkins, Scott Ostler — they’re gonna be in here, and when they’re taking a whizz they’re going to be looking right at me.” Tolbert added. “It’d be great if there was a picture. Talk about stage fright. They probably wouldn’t be able to go at that point.”

“Like a lot of people have said: When you urinate, you think Tom Tolbert. That will never be more true than right here in the media restroom.”

(Editor’s Note: As for a Facebook from Stone, she simply called it the “funniest day ever!” We see why.)