The future home to the Los Angeles Rams and Los Angeles Chargers, SoFi Stadium is reportedly on track to be completed in July. Throughout its planning process, it has been expected that the multibillion-dollar stadium will draw a number of non-NFL events, and an annual college football bowl game adds to that agenda.

As was announced Wednesday, the LA Bowl will pit the Mountain West Conference’s number-one selection against the 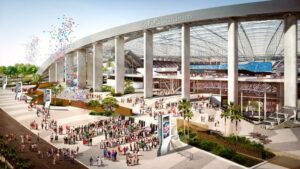 Pac-12 Conference’s number-five selection. The 2020 edition of the game will be held in December, though a specific date and kickoff time will be announced at a later date.

“Similar to SoFi Stadium, the LA Bowl game is designed to deliver an authentic Southern California experience,” Jason Gannon, managing director of SoFi Stadium and Hollywood Park, said in a press statement. “In addition, our bowl game events throughout the week will embrace Los Angeles as the entertainment capital of the world.”

For the two conferences, staging an annual bowl game in a major western market has its advantages. Adding to that, however, is the amenities that SoFi Stadium and the surrounding Hollywood Park development will offer, something that representatives from both conferences stressed in Wednesday’s announcement.

“We are thrilled to partner with LA Bowl and bring a Pac-12 presence to the new state-of-the-art facility at SoFi Stadium, in one of the biggest markets right in our footprint,” Pac-12 Commissioner Larry Scott said in a press statement. “The entertainment presence of the new facility will provide great experiences for our student-athletes and fans as the Pac-12 continues its postseason matchup with the Mountain West.”

“The Mountain West is delighted to partner with the Pac-12 Conference and the outstanding management team assembled at SoFi Stadium and Hollywood Park to launch this exciting new bowl game,” Mountain West Commissioner Craig Thompson said in a press statement. “Los Angeles is a tremendous market firmly within our footprint that is home to a large number of our member institutions’ alumni and the area from which many of our student-athletes are recruited. This will be a top-flight postseason destination for the No. 1 selection from our Conference.”

It is not unusual to see new NFL facilities land major college-football games, and that trend will continue in 2020 with Las Vegas’s Allegiant Stadium hosting the Pac-12 Championship in 2020 and 2021, along with the annual Las Vegas Bowl. Still, with SoFi Stadium set to host the LA Bowl through at least 2025, Wednesday’s announcement brings another notable entry to a slate of future events that includes the Super Bowl in 2022, the 2023 College Football Playoff National Championship, and the 2028 Summer Olympics.

As part of a project led by Rams owner Stan Kroenke, SoFi Stadium will be the anchor of the larger Hollywood Park development, a sprawling 298-acre sports and entertainment destination that is expected to draw crowds on a year-round basis. The stadium naming-rights agreement with SoFi, a digital personal-finance firm, was announced in September.