Hurricane Florence is now a Category 1 hurricane after making landfall along the coast of North Carolina. The ramifications from the storm’s fury will likely be felt for an extended period of time. Prior to the hurricane’s arrival, we were able to speak with Larry Perkins, CVE, assistant general manager of PNC Arena in Raleigh, to check on our friends and to find out what they were planning as a venue to deal with the event.

“Our parking lots are being used for staging,” Perkins said. “We are also opening up our locker rooms to folks coming in from 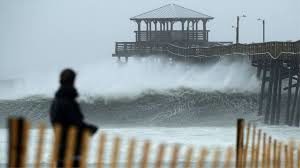 out of town who can take a shower. We’re going to feed them, give them a bite to eat. We are going to be ready to go to respond to this emergency.

“Then we are going to open the building up to our employees from the surrounding area. If they don’t feel safe in their homes, they’ll come here. We want them to assume they are going on an outing or camping. Bring your blanket and things of that nature because we obviously don’t have beds.”

Perkins said that he and others have been in dialogue with federal agencies in advance of the storm in making preparations and that they are as ready as can be as they began accepting people by noon today (Friday).

“People can make their claim on a part of our concourse and some of them we will put in our suites to keep families together. We’re doing that. Once the hurricane goes through we are going to collect some donations. We haven’t decided that yet and how it goes. We are going to use some of our crews as we have about nine chain saws and will probably send them out in the community to take down trees and debris.

“Of course, the staging was already in place because we had to get those folks to North Carolina early so that they are in position.”

As for his own well-being, Perkins said he is doing good and will be available throughout the cycle. Perkins, a native of Enfield, NC, said that he has a home in that country setting that he is concerned about.

“it gets flooded easily and I have large trees right over my house. Other than that I am good.”

We have been working with FEMA and the NC State Emergency Management to try an assist in the response and recovery efforts. We are using the PNC Arena parking lots for staging Duke Energy and other Recovery Teams, and PNC Bank will stage mobile ATM equipment and vehicles. Plus, we are offering showers and food to the crews.

Right now, we are not announcing the employee shelter, but may announce tomorrow once we see how the weather is progressing.