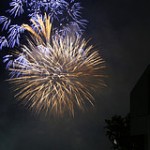 The United States of America celebrates Independence Day on July 4, which means people flocking to the lakes, firing up the grill for burgers and dogs, countless parades festooned in red, white and blue and of course an evening capped by fireworks.

For some venues participating in festivals and fireworks makes for quite a nice revenue producer during an otherwise dark date. Take the Rose Bowl in Pasadena, California, for example. The iconic venue will present its 87th Annual 4th of July Celebration (presented by Honda, no less) where families are invited to celebrate America with music, food and fireworks.

The venue makes this an almost all-day extravaganza that starts at 2 pm with a festival outside the stadium, comes inside the venue at 7 pm for a live TNT motorcycle stunt show and performance by the Mariachi Divas & Kenny G and of course wraps up with “the biggest fireworks show in Southern California (produced by PyroSpectaculars by Souza, no less).

Reserved seating goes for $25 per person with general admission at $13. Children seven and under are admitted free.

Not every venue, of course, has the size or resources of the Rose Bowl. That does not mean that a fireworks show can’t be produced for a noble reason.

“For some venues participating in festivals and fireworks makes for quite a nice revenue producer during an otherwise dark date.”

In Flint, Michigan, where both the unemployment and crime rates seem to generate the most news, the historic Atwood Stadium will present a fireworks presentation at a tailgate party in the parking lot to raise money for the operation and maintenance of the stadium.

John McGarry, the stadium’s director, said, “This will be a fun way to get the best view of the fireworks in town.”

Of course, Washington, D.C. does July 4 like no one. A celebration on the National Mall with the city’s monuments and the U.S. capitol in the background forms a beautiful and patriotic backdrop for an all-day event that begins with a parade along Constitution Avenue and ends with a fireworks display over the Washington Monument.

As for me and my family, yeah, we’ll be at a stadium on the 4th taking in a baseball game followed by a fireworks show. Nothing says July 4th quite like being at QuikTrip Park to watch the host Grand Prairie Air Hogs do battle with those bitter rival Wichita Wingnuts. Play ball, and to all a safe and happy 4th of July!