Lightning 101: Blink and You’ll Miss it 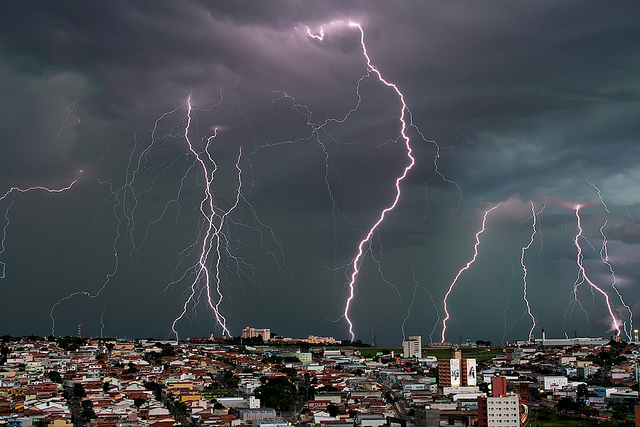 Severe weather can occur at any time of the year, although many areas across the country see the majority of their severe weather from March through August.  As our venues approach the busy spring event season, we thought it would be good to remind our venue managers about severe weather preparedness. We encourage you to sign up for IAVM’s Severe Weather Preparedness taking place March 4-5 at the National Weather Center in Norman, Oklahoma. In the meanwhile, here are some amazing lightning facts that might inspire you to take action.

Lightning takes many forms: cloud-to-cloud, cloud to ground, or the reverse, as ground-to-sky discharge. Regardless of the direction of the lightning stroke, a great deal of energy is released as the electrical charge balance of the earth’s atmosphere is restored.

There is an average of 25 million lightning strikes each year. Each day the earth is struck by lightning about 10,000 times so that’s about 100 strikes per second.

Most lightning is formed as part of a thunderstorm. Each day on our planet, approximately 40,000 storms form. At any given moment that’s 1,800 storms.

As the static electric charge builds in a cloud, the air in the vicinity of the charge begins to ionize. A column of ionized air called a pilot stream, or step leader, begins to extend toward earth at a rate of about 100 miles per hour.

Once the air is ionized, it allows the current to move through the ionized air or plasma and the positive charge on the earth surface attracts the negative charge in the cloud through this step leader. When the stream and the step leader meet, they form a complete path for lightning to travel and the strike occurs.

Most lightning flashes are not a single event, but rather numerous strokes. There can be up to 40 strokes to a lightning bolt, but an average lightning strike consists of three strokes, with a peak current flow of 18,000 amperes for the first impulse and about half that amount of current flowing in the second and third strokes.

Each stroke is complete in about 20 millionths of a second. Compare that to the blink of a human eye, which takes about 400 thousandth of a second.

Once the lightning strike occurs, the air becomes conductive plasma, with a temperature reaching up to 50,000 degrees Fahrenheit. The heating makes the plasma luminous; in fact, it is brighter than the surface of the sun.

The air around the strike heats up and expands so much that it causes a shock wave in the form of a sound wave that radiates away from the strike area—what we know as thunder. The loudest thunder ever recorded was at 234 dB (decibels). A jet engine at 100 feet away is 140dB. At 180dB, hearing tissue is damaged.

The sound of thunder travels slower than the light emitted from the strike, thus the lag in hearing the sound. The flash-to-bang method of determining distance from a strike is still used by some venues and organizations hosting outdoor events.

To use the flash-to-bang method—count the seconds between the flash and the bang of thunder. Sound travels approximately 1 mile in 5 seconds so you can determine the approximate distance to the lightning by counting. It is recommended you seek shelter inside a fully enclosed, grounded structure or metal vehicle if the time between the lightning and the thunder is less than 30 seconds (6 miles away). Why are we safe in a vehicle? Electrically speaking, at lightning’s highest frequencies, currents are carried mostly on the outside of conducting objects. So, in a strike to a vehicle the outer surface of the vehicle carries most of the electricity and the person inside the steel box is protected by a partial Faraday cage.

When humans come in contact with this energy, the consequences can be fatal. In 2013, lightning strikes caused 23 U.S. deaths, according to the National Weather Service. Between 1980 and 2009, there were an average of 57 fatalities each year.

Lightning tends to strike the tallest object regardless if it is a conducer of electricity. Objects extending above their surroundings such as flog poles, light poles, towers, and antennas are more likely to be struck not because they consist of metal, but because they are often the highest object. However, the tallest objects in a storm don’t always get struck by lightning. Lightning can strike the ground at a close distance to a tall object. While taller objects may have a higher possibility of a strike, the strike path is not predictable.

So while the probability of a human strike is low, for large venues it may be the crowd density in a venue versus the crowd size that becomes the greatest safety threat to spectators during a thunderstorm.

The NFPA (National Fire Protection Association) notes the greatest risk in a severe storm involving lightning is the risk of panic in the large venue where mass crowd movement to safe shelter becomes difficult and panic ensues.

A special thanks to Charlie Woodrum, NOAA Meteorologist for his contributions to the article.
(Image: Chaval Brasil via photopin cc)