by R.V. Baugus
#teamsforlaonlinesupersale, aeg
Comments are off

Fans of many of Los Angeles’ most popular professional sports franchises will now have the chance to acquire merchandise bearing their favorite team’s recognizable logos and colors while also donating to the Mayor’s Fund for Los Angeles.

AEG, the LA Clippers, LA Galaxy, LA Kings, Los Angeles Lakers, LA Sparks and Rank + Rally have joined forces to launch the TEAMS FOR LA ON-LINE SUPERSALE to sell logoed team merchandise, as well as classic merchandise from the Coachella Valley Music and Arts Festival and the GRAMMY Awards, to benefit the Mayor’s L.A. Emergency COVID-19 Crisis Fund. Proceeds from the website support critical needs as they arise in our city – such as childcare and meals for the neediest, relief and counseling for frontline healthcare workers, critical healthcare equipment, and services for our homeless population.

The site, which will be updated regularly, will offer jerseys, hats, t-shirts, warm-ups, scarfs, bobbleheads and 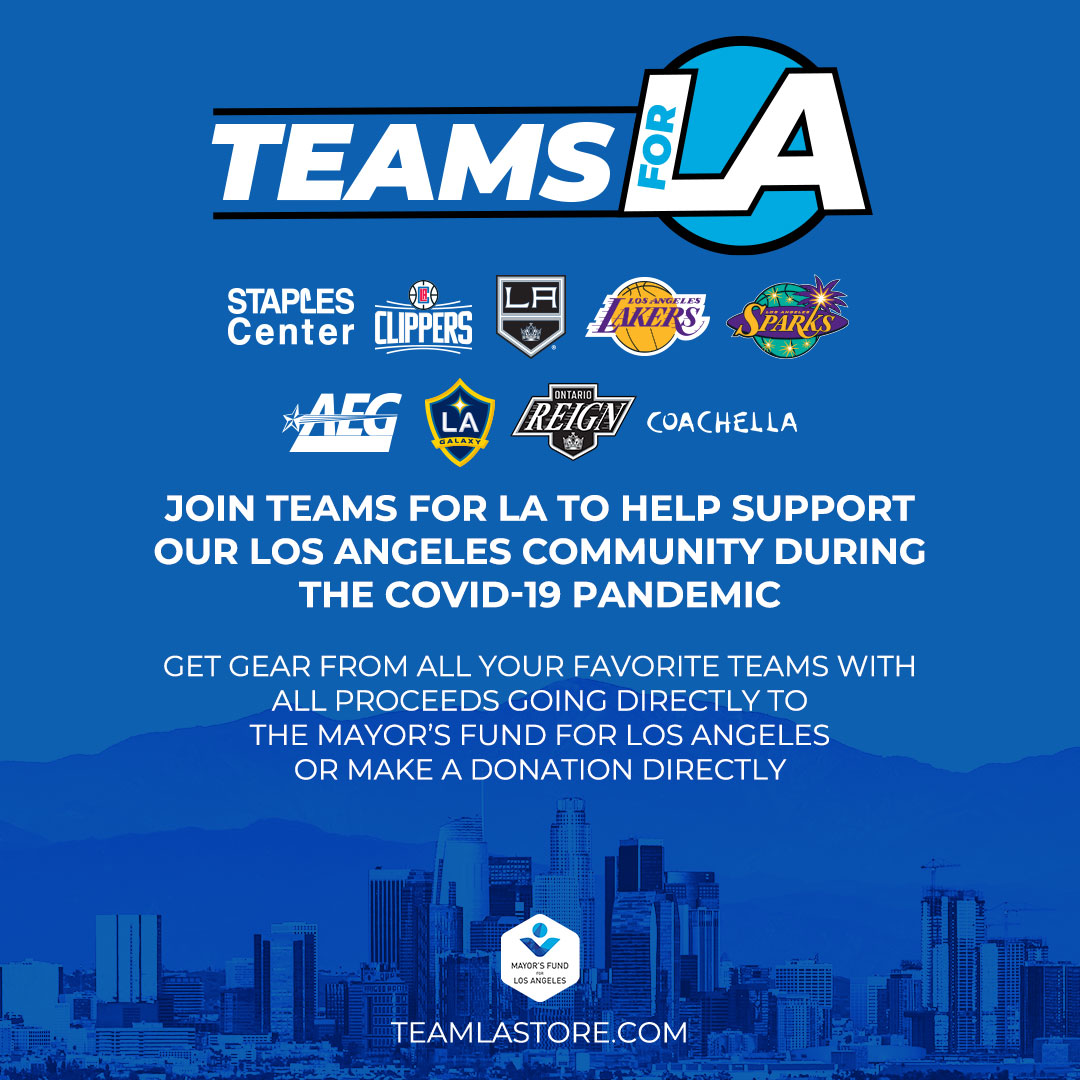 other specialty items bearing the current and classic logos of the LA Clippers, LA Galaxy, LA Kings, Los Angeles Lakers, LA Sparks, Ontario Reign and TEAM USA (basketball), as well as merchandise from high-profile events that have taken place in Los Angeles including the 2011 and 2018 NBA All-Star Games, the 2017 NHL All-Star Game, the Amgen Tour of California, memorable championship boxing events and music events such as the GRAMMY Awards and the Coachella Valley Music and Arts Festival.

“All of us in the Los Angeles sports community have been looking for additional ways to support the tremendous efforts of our City’s leadership and to help those in our community that are most impacted by the Coronavirus outbreak,” said Dan Beckerman, President and CEO, AEG. “Our collective donation of merchandise will provide our fans a way to show their ongoing support for their favorite teams while also contributing to help their fellow Angelenos in need.”

In addition to the 30,000+ items offered at discounted prices, fans can also send gear through the site directly to local shelters and non-profits for those that need it most. All financial contributions will be donated directly to the Mayor’s Fund.

Fans are encouraged to visit the site often as new items will be added as they become available as well as other ways to support those affected in our region.