The Los Angeles Convention Center (LACC), owned by the City of Los Angeles and managed by ASM Global, announced the appointment of Scott Banks as the new Vice President of Security & Guest Services and Patrick Smart as the new General Manager of Taste of LA by Levy at the LACC.

Banks joins the LACC from Dignity Health Sports Park in Carson, CA, where he most recently served as the Director 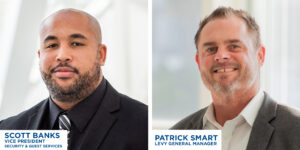 of Security & Guest Services. During his 16-year tenure, Banks rose from a part-time security officer to his most recent position.

Patrick Smart brings 19 years of catering experience to the LACC. He most recently served as the Director of Sales at ARAMARK at the Anaheim Convention Center for the past 12 years.

“Scott and Patrick are both remarkable additions to our executive team,” said Ellen Schwartz, General Manager, LACC. “They both bring valuable experience to the LACC and I’m excited about what we will accomplish together.”