The Los Angeles Convention Center (LACC), owned by the City of Los Angeles and managed by ASM Global, the premier venue management and services company, marked 50 eventful years with a live celebration on Thursday, July 29th.

After touring the LA Art Show, the first large-scale event to be hosted by the Convention Center since re- 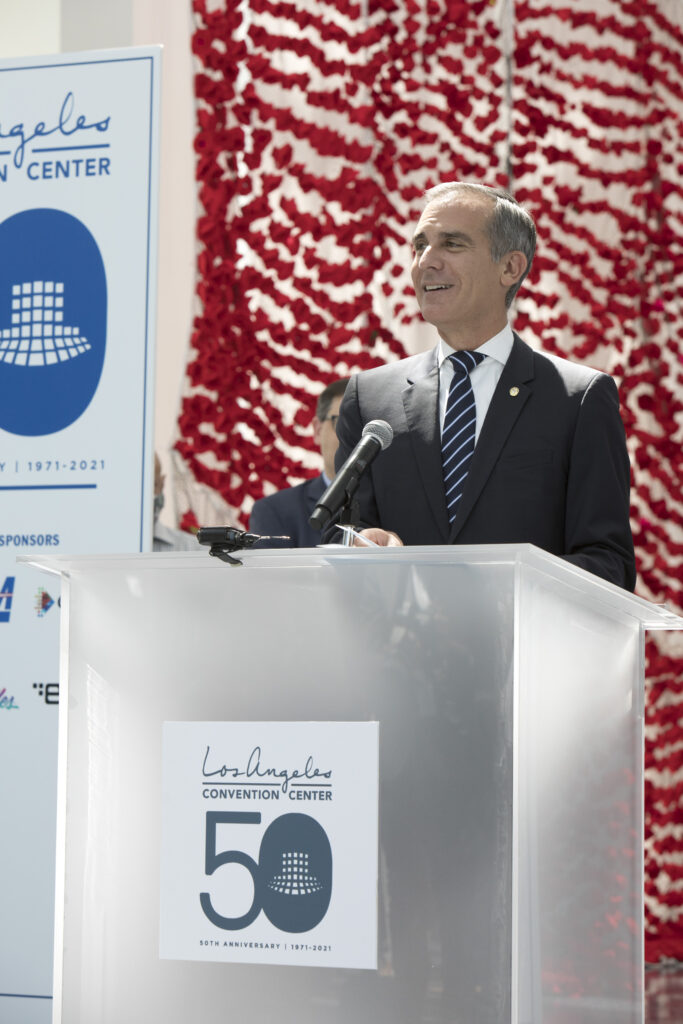 “After an extended hiatus brought on by the COVID-19 pandemic, we are excited to bring large scale events back to Los Angeles. The Convention Center has been an economic engine for our city’s economy for the past 50 years, and we look forward to building on that legacy by welcoming even more visitors and conventions in the future,” commented Liu.

At the celebration, the Los Angeles Convention Center Hall of Fame was officially unveiled. Three events were named as the 2021 inaugural LACC Hall of Fame inductees: Anime Expo, the Los Angeles Auto Show, and Ski Dazzle. These iconic events were recognized by Ellen Schwartz during the program. “We are thrilled to have the 50th Anniversary celebration be a platform to launch the LACC Hall of Fame. Here, we can formally recognize the events that have contributed to the success of this Center,” Schwartz said. “Each July, additional events will be named to the LACC Hall of Fame and collectively, these events will illustrate the vibrant history of this great facility.”

The 50th Anniversary celebration coincided with the opening of the LA Art Show, the most comprehensive international contemporary art show in America. Kassandra Voyagis, Producer and Director of the LA Art Show, said, “I am so excited to be bringing the LA Art Show to the Los Angeles Convention Center, on the heels of a difficult year. Now more than ever, we need a physical art fair to unite the creative community. Thanks to this incredible space, we are able to safely welcome our artists, exhibitors, and patrons for a celebration of art and culture. We are thrilled to celebrate the LACC’s 50th Anniversary in conjunction with our return.”