The Los Angeles Convention Center (LACC), owned by the City of Los Angeles and managed by ASM Global, introduced the LACC Hall of Fame during the Center’s 50th Anniversary Celebration.

“We are thrilled to have the 50th Anniversary celebration be a platform to launch the LACC Hall of Fame. Here, we can celebrate three significant events that have contributed to the success of this Center,” said LACC General Manager Ellen Schwartz.

Ski Dazzle founders Jim Foster and Judy Gray commented, “We were totally surprised when Ellen Schwartz called Ski Dazzle to the podium to be honored as the first inductee into the Los Angeles Convention Center’s new Hall of Fame. Being the longest running event produced in the building, we are mindful of the special relationship we have with the City of Los Angeles and the LA Convention Center. We are honored to have been selected among those recognized.”

LA Auto Show (LAAS) owner Lisa Kaz added, “There is a long history between our event and the facility, so 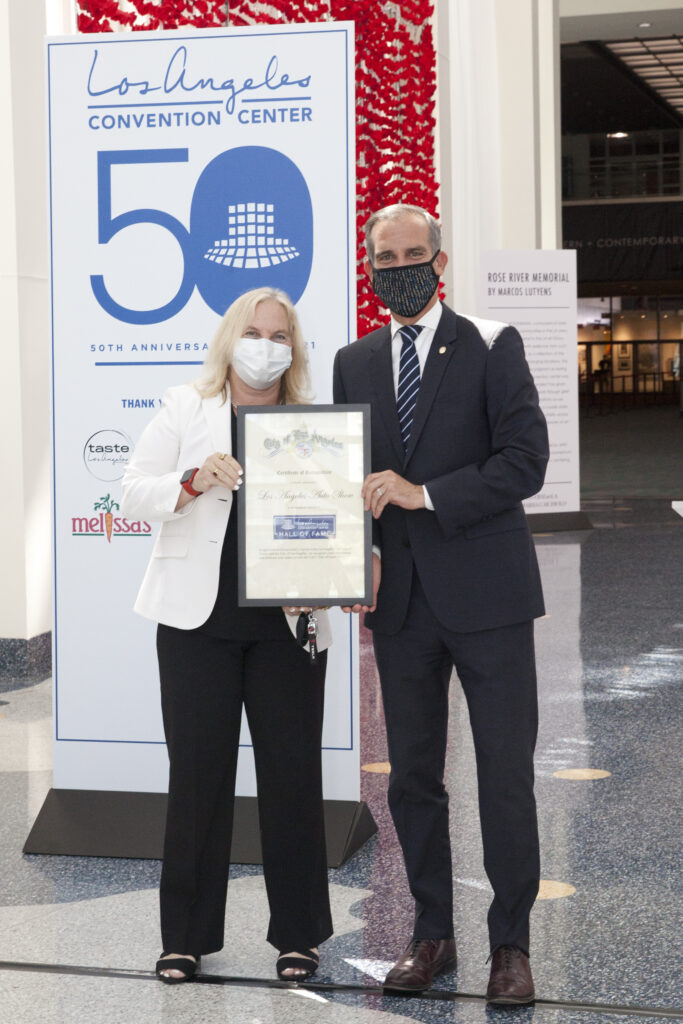 this acknowledgement is especially nostalgic for me. My grandfather moved the Auto Show to the Convention Center as soon as it opened its doors 50 years ago and we’ve been there ever since. To be among this initial group of inductees to the LACC Hall of Fame, as we plan our 2021 edition and the return to live events, is a great honor.”

“Since 2008, the Los Angeles Convention Center has been the home of Anime Expo and witnessed many of our important milestones,” said Ray Chiang, CEO of SPJA, the organizer of Anime Expo, “We are honored to be a part of LACC’s 50th Anniversary Celebration as an inaugural inductee into their new Hall of Fame. We look forward to returning to the Los Angeles Convention Center for an in-person event next year on July 1-4, 2022 as well as continuing our annual celebration of Japanese pop culture for years to come.”

To commemorate their induction, Mayor Eric Garcetti presented each of the organizers with a framed proclamation from the City of Los Angeles.

Each July, additional events will be named to the LACC Hall of Fame and collectively, these events will illustrate the vibrant history of the Los Angeles Convention Center.